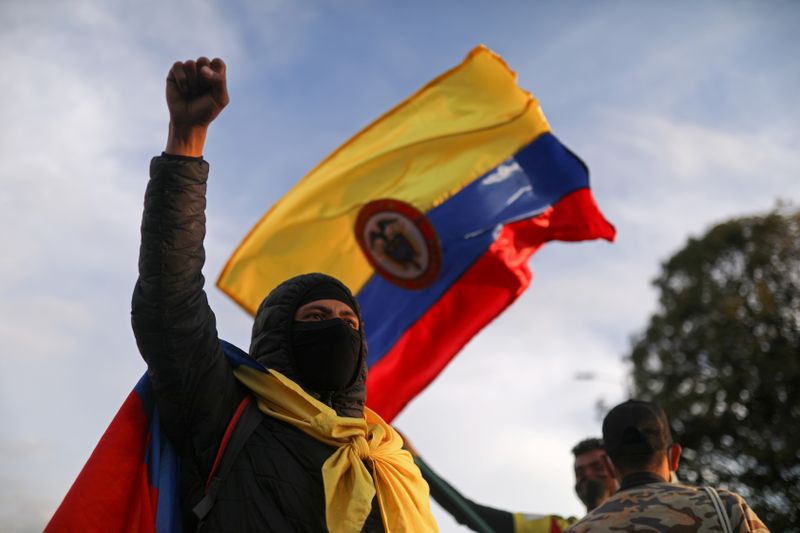 FILE PHOTO: A demonstrator takes part in a protest demanding government action to tackle poverty, police violence and inequalities in the health and education systems, in Bogota, Colombia May 6, 2021. REUTERS/Luisa Gonzalez/File Photo

HAVANA (Reuters) – Communist-run Cuba called in Colombia’s ambassador on Friday to protest the expulsion of one of its diplomats from the Andean country amid a wave of violent protests against its right-wing government.

Cuba has faced charges of fomenting anti-government protests in recent years by conservative governments in Ecuador and Bolivia allied with the former U.S. Trump administration which vowed to end socialism in Latin America.

“The unjustified action aims to deviate the attention of the international community and Colombian society away from the violent repression of demonstrations by the military and police forces that has killed dozens and injured hundreds,” the Cuban foreign ministry said on Twitter.

Cuban state media have given ample coverage to the protests in Colombia that began last week in opposition to a now-cancelled tax reform plan which would have raised sales taxes.

Demonstrators have since broadened their demands to include government action to tackle poverty, police violence and inequality in the health and education systems.

Cuban commentators have in particular criticized the government for failing to curb police violence.

The protests come as the one-party Cuban state is dealing with a small but unusual wave of dissent at home, with members and allies of a dissident artists collective in Havana protesting against restrictions on civil liberties, economic crisis and growing inequality.