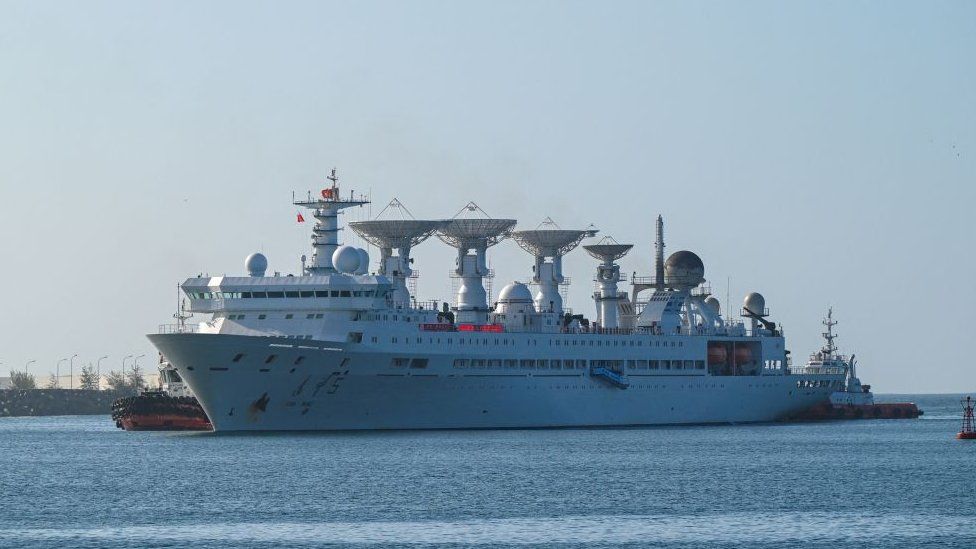 The Yuan Wang 5 was given permission to dock on the condition it would not carry out research while in Sri Lankan waters, said port officials.

India had previously voiced concerns that the ship would be used to spy on its activities, said media reports.

Sri Lanka’s Foreign Ministry said the ship will be allowed to remain in the Chinese-run port until 22 August.

One report by Indian news site NDTV said the government in Delhi was concerned about “the possibility of the ship’s tracking systems attempting to snoop on Indian installations while on its way to Sri Lanka”.

Earlier in July, an Indian foreign ministry spokesman said the government was monitoring the ship’s planned visit, adding that Delhi would protect its security and economic interests.

According to a Reuters report, India had lodged a verbal protest with the Sri Lankan government against the ship’s visit.

China responded, saying it was “completely unjustified for certain countries to cite so-called ‘security concerns’ to pressure Sri Lanka” – though it did not name any specific country. Sri Lanka later announced that the boat would be given permission to dock.

Attempting to strike an elusive balance?

The controversy over the ship reflects the diplomatic tight spot that Sri Lanka finds itself in every time it has to choose between India and China.

While India has denied that it put any pressure on Sri Lanka over the ship, it did say that it “carefully monitors any development having a bearing on its security and economic interests” – an indirect comment as to how it views the vessel.

Delhi has been at the forefront of sending aid to Sri Lanka in recent months to help it overcome its economic crisis, but this latest controversy could cast a shadow over this.

Many in Delhi’s diplomatic circles are wondering if the new administration in Colombo is again trying to find that elusive balance between India and China.

It will be interesting to see how Delhi reacts to this in the coming days – both privately with Sri Lankan leaders and in their public statements.

India’s concerns come amidst Beijing’s increasing influence in Sri Lanka – which is currently in a severe economic crisis.

Beijing has loaned billions of dollars to the country as part of its Belt and Road Initiative to build infrastructure in Asia. However, not all of the funding has worked in Sri Lanka’s favour.

For example, in 2017, China Merchants Port Holdings took a majority share with a 99-year lease in Hambantota port – where the Yuan Wang 5 is currently docked – after Colombo struggled to repay the debt incurred to build it.