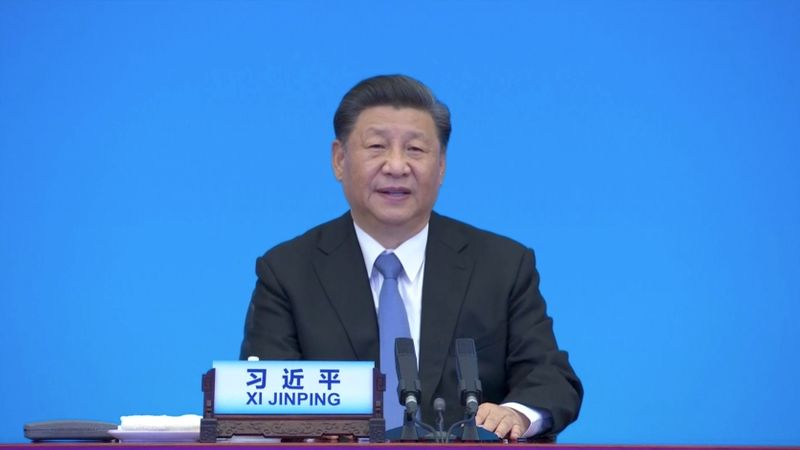 Chinese President Xi Jinping speaks via video link at the CPC and World Political Parties Summit, held to commemorate the 100th founding anniversary of Communist Party of China (CPC), in Beijing, China in this still image taken from a video July 6, 2021. CCTV via Reuters TV

BEIJING (Reuters) – Chinese President Xi Jinping on Tuesday urged political parties worldwide to oppose any country that engages in “technology blockades”, an allusion to the United States which views China as its strategic competitor.

As U.S. President Joe Biden’s administration has sought support from like-minded democracies including the European Union and Japan to coordinate a tougher stance against China, Beijing has doubled down on seeking support and affirmation from friendly nations such as North Korea and Serbia.

“Together, we must oppose all acts of unilateralism in the name of multilateralism, hegemony and power politics,” Xi told a virtual gathering of representatives of 500 parties from 160 countries such as Russia, Zimbabwe, Cuba and Burkina Faso.

“Looking from the angle of ‘My Country First’, the world is narrow and crowded, and often full of fierce competition,” Xi said in apparent reference to former U.S. President Donald Trump’s “America First” policy.

Xi renewed a call to work towards “building a community with a shared future for mankind” and said any country that engages in “technology blockades” and “developmental decoupling” should be rejected.

Chinese diplomats have often criticised the United States for allegedly trying to hamper China’s development by cutting off its access to U.S. technology.

Xi, also General Secretary of the Chinese Communist Party, was speaking at the CPC and World Political Parties Summit, one of many events held by Beijing to commemorate the centenary of the ruling party.

Tuesday’s virtual gathering was meant to help the international community “adjust more quickly to the rise of China” and for Beijing to gain more “understanding, support and companionship,” said Guo Yezhou, vice minister of the International Department, which organised the event.

China is increasingly worried about its international image, tarnished by anger towards its initial handling of the COVID-19 outbreak, its maritime and territorial assertiveness towards neighbours, its clampdown in Hong Kong and treatment of ethnic minorities in Xinjiang, and its “wolf-warrior” diplomats who engage in a war of words with critics.

A survey of 17 advanced economies released last Wednesday by the U.S.-based Pew Research Center showed that views about China have remained broadly negative and confidence in Xi near historic lows.