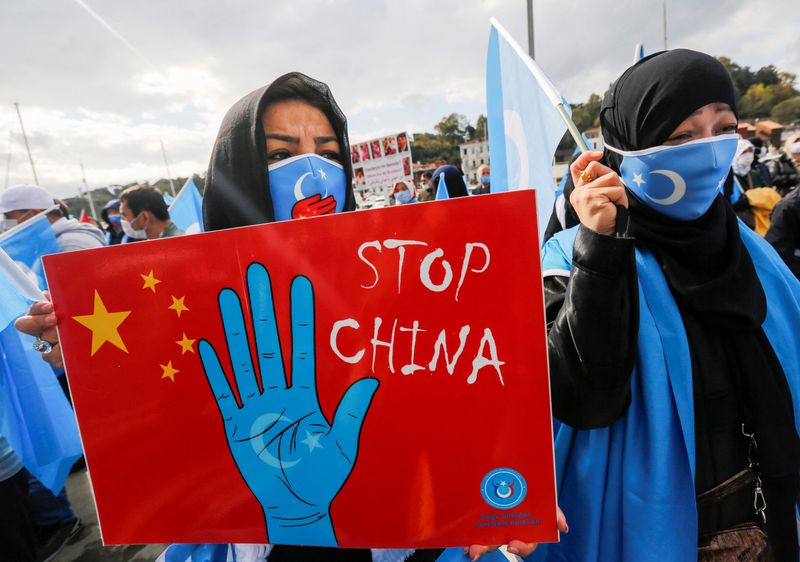 BEIJING/LONDON (Reuters) -An unofficial tribunal of lawyers and campaigners said Chinese President Xi Jinping bore primary responsibility for what it said was genocide, crimes against humanity and torture of Uyghurs and members of other minorities in the Xinjiang region.

China dismissed the tribunal, which is headed by British lawyer Geoffrey Nice and has no powers of sanction or enforcement, as a “farce” being used by its enemies to spread lies.

“The People’s Republic of China (PRC) has committed genocide, crimes against humanity and torture against Uyghur, Kazakh and other ethnic minority citizens in the north west region of China known as Xinjiang,” the British-based Uyghur Tribunal said https://uyghurtribunal.com/wp-content/uploads/2021/12/Uyghur-Tribunal-Summary-Judgment-9th-Dec-21.pdf on Thursday.

“The Tribunal is satisfied that President Xi Jinping … and other very senior officials in the PRC and CCP (Chinese Communist Party) bear primary responsibility for acts that have occurred in Xinjiang.”

The World Uyghur Congress (WUC), which represents the interests of the mostly Muslim Uyghurs in Xinjiang and around the world, asked Nice in 2020 to set up an independent tribunal to investigate accusations of abuse in Xinjiang.

Some foreign lawmakers and parliaments, as well as the U.S. secretaries of state in both the Biden and Trump administrations, have labelled the treatment of Uyghurs as genocide.

But China vehemently denies that.

In a statement on Thursday, its foreign ministry dismissed the WUC as a separatist organization under the control and funding of anti-China forces in the United States and the West.

“This so-called court has no legal credentials nor any credibility,” a ministry spokesperson said, describing the testimony given as false and the final judgment as a “political farce performed by a few clowns”.

“Lies cannot conceal the truth, cannot deceive the international community nor stop the historic course of … Xinjiang’s stability, development and prosperity,” the ministry spokesperson said of the Uyghur tribunal.

U.N. experts and rights groups estimate more than a million people, mainly Uyghurs and members of other Muslim minorities, have been detained in recent years in a vast system of camps in Xinjiang.

China initially denied the camps existed but later said they were vocational centres and designed to combat extremism. In late 2019, China said all people in the camps had “graduated”.

The Chinese embassy in London said the tribunal was a tool of China’s enemies who were spreading lies.

It is “nothing but a political tool used by a few anti-China and separatist elements to deceive and mislead the public,” an embassy spokesman said.

“Anyone with conscience and reason will not be deceived or fooled,” the spokesman said.