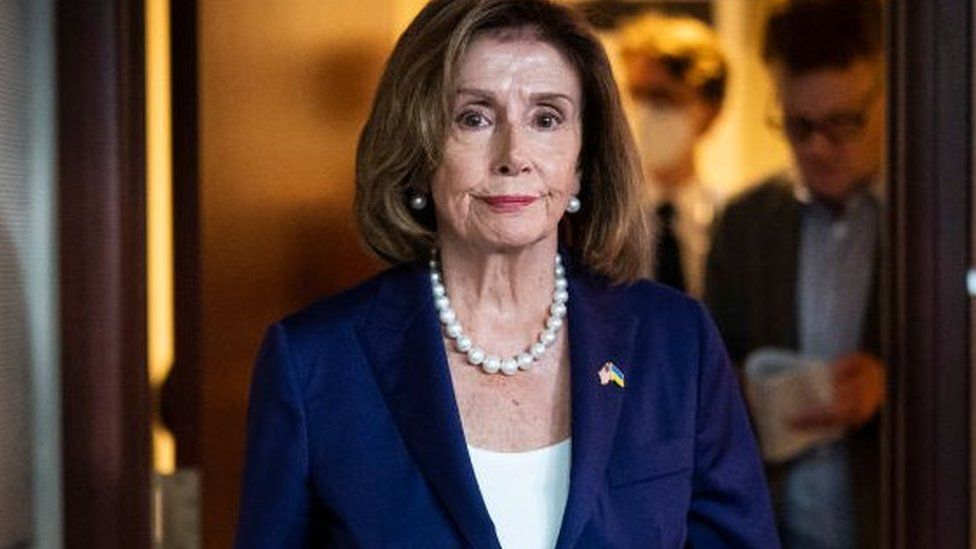 The White House has warned China may respond to Nancy Pelosi’s mooted visit to Taiwan with military provocations.

This could include firing missiles near Taiwan, or large-scale air or naval activities, spokesman John Kirby said.

Mrs Pelosi, the US House of Representatives Speaker, touched down in Malaysia on Tuesday on her tour of Asia.

Taiwanese and US media says she plans to visit Taipei on Tuesday night, but there’s been no official confirmation.

She added Taiwan “would make the most appropriate arrangements” for any visitors.

Taiwan is a self-ruled island, but claimed by China, which sees it as a breakaway province. Beijing has warned of “serious consequences” if Mrs Pelosi visits.

While the US maintains what it calls a “robust, unofficial relationship” with Taiwan, it has formal diplomatic relations with China and not Taiwan.

On Monday, China’s United Nations envoy Zhang Jun warned the visit would undermine relations between Beijing and Washington. China’s Foreign Ministry also said a Pelosi visit would “constitute a gross interference in China’s internal affairs” adding: “Those who play with fire will perish by it”.

There is strong bipartisan support for Taiwan among the American public and in the US Congress. And Mrs Pelosi, a senior figure in the Democratic Party, has long been a vocal critic of the Chinese leadership, denouncing its human rights record. She has previously met pro-democracy dissidents and visited Tiananmen Square to commemorate victims of the 1989 massacre.

The speaker began her Asia tour on Sunday by flying to Singapore. Her public itinerary also included stops in Malaysia, South Korea and Japan – but did not mention Taiwan.

Mrs Pelosi originally planned to visit Taiwan in April, but postponed the trip after she tested positive for Covid-19.

Earlier this month she said it was “important for us to show support for Taiwan”.

President Joe Biden has said the US military believes a Pelosi visit to Taiwan is “not a good idea right now”.

On Monday, White House national security spokesman John Kirby said China’s escalations could also include making “spurious legal claims” in the days to come, for example by claiming that the Taiwan Strait is not an international waterway.

He said other signs indicate that Beijing may send flights towards the island, as part of a planned incursion into Taiwan’s airspace.

Mr Kirby pointed out that Republican former Speaker of the House Newt Gingrich had visited Taiwan in 1997, and that other US lawmakers visited Taiwan earlier this year.

“Nothing has changed. There is no drama to talk to. It is not without precedent for a Speaker of the House to go to Taiwan,” he said, adding that Mrs Pelosi is travelling on US military planes during her Asian tour.

However, China’s UN ambassador Zhang Jun said Ms Pelosi’s visit now was not comparable to the 1997 visit and would be seen as a provocation.

Speaking at the UN, US Secretary of State Antony Blinken called on China to be measured in the event that Mrs Pelosi does visit.

“If the speaker does decide to visit, and China tries to create some kind of crisis or otherwise escalate tensions, that would be entirely on Beijing,” he told reporters after nuclear non-proliferation talks in New York.

“We are looking for them – in the event she decides to visit – to act responsibly and not to engage in any escalation going forward.”