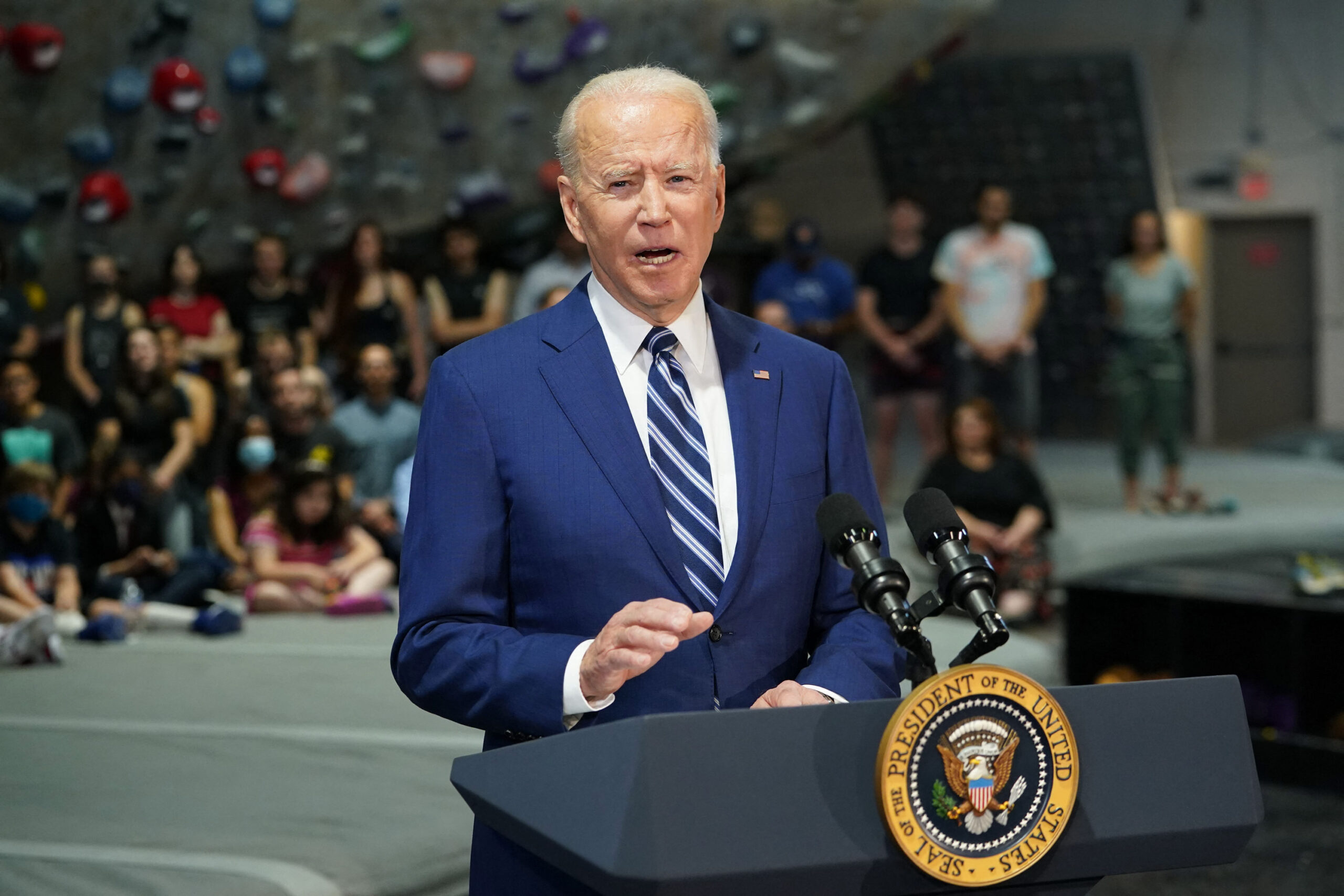 President Biden projected a sense of hope and optimism heading into the Memorial Day weekend, touting the progress the country has made in combatting the coronavirus pandemic thanks to the vaccination efforts, help from local leaders, and Americans who have done their “patriotic duty.”

“Four months after I took office, we’re further along in this fight than anyone thought possible. Let’s remember where we were 129 days ago. When I took office, we were averaging 184,000 cases per day nationwide. Here in Virginia, as the governor pointed out, schools were closed, main street had gone quiet here and in cities all across America.” Biden said during remarks at Sportrock Climbing Center in Alexandria, Virginia, on Friday.

“And today you’ve gone from 184 cases per day nationwide to fewer than 22 cases — 22,000 cases per day. Deaths have dropped by over 85%. Tens of thousands of moms and dads, grandpops and grandmas, brothers, sisters, neighbors, friends are still with us today who would otherwise have been lost,” he added.

The President said thanks to the 165 million Americans who have gotten at least one shot and 51% of Americans who are fully vaccinated, “we’re not just saving lives, we’re getting our lives back.”

“Stores and restaurants up and down main street are hanging open signs on their front doors. And here, in the rock-climbing gym we’re greeted by another and we’re greeting one another, with smiles, with our masks off,” he said.

However, Biden stressed that despite the growing light at the end of the tunnel, Americans can’t let up now, and he urged those not yet vaccinated against Covid-19 to do so.

“As more Americans get vaccinated the days grow brighter and brighter but let me be clear, we’re not done yet. We have to reach those who are not vaccinated and make it as easy as possible for them to get protected,” the President said, calling on Americans to “sprint through the finish line.”

Biden also said that the increase in vaccinations across the country shows that Americans are willing to come together for a common goal of beating the virus.

“When I ran for office, I said I wanted to do three things, one of which was to unite the country. It’s difficult, but this is the first real evidence that we’re able to do it. The American people are more ready to come together, I believe, than the Congress and the elected officials are, but we’re getting there,” he said.

The President also touted the economic progress the country has made since he has taken office, just hours before his first budget proposal gets sent to Congress.

Virginia Gov. Ralph Northam also spoke Friday, discussing the progress his state specifically has made in getting to a point where it can roll back restrictions.

“Today we mark a tremendous milestone in our fight against Covid-19. As of 12:01 this morning, for the first time since March 2020, there are no limits on capacity or distancing in Virginia’s restaurants, businesses, offices or other venues. That’s something that we can all be proud of,” Northam said.

He also touted the state’s vaccination efforts, saying 66% of Virginia adults have had at least their first shot and more than half of adults are fully vaccinated, adding that the state will hit Biden’s goal of 70% of adults getting at least one shot by July 4.

Northam praised the Biden administration for following the science, taking a – not so veiled – swipe at the Trump administration.

“As Governor, I can tell you that having a partner in the White House, makes a huge, huge difference, setting clear goals as he has done, and support us with the resources we need to meet those goals. And as a doctor, I know it also makes a big difference when leadership respects science and follow its lead,” he said.