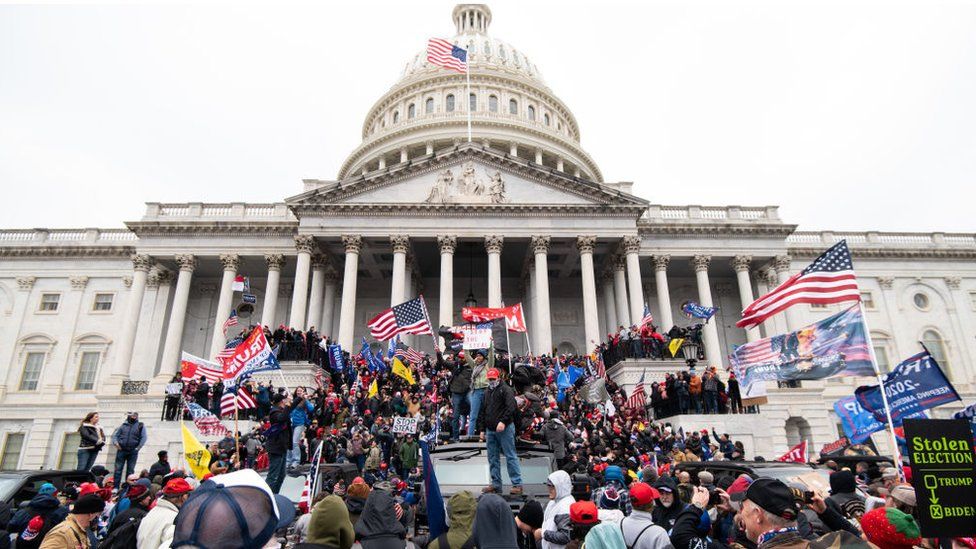 The committee investigating the US Capitol riots has put the spotlight on the behaviour of former President Donald Trump as armed demonstrators invaded the seat of American democracy on 6 January 2021.

The congressional committee – made up of five Democrats and two Republicans – has been look at the planning and execution of the attack that sent shockwaves around the world.

Its members have called dozens of witnesses, all with the goal of building a case that Mr Trump launched an illegal bid to overturn his defeat at the hands of Joe Biden in the 2020 presidential election and to retain power at all costs.

The panel has suggested there might be enough evidence bring criminal charges against Mr Trump.

The evidence against the 76-year-old billionaire has been presented methodically in eight dramatic, made-for-TV style hearings. Here are eight of the biggest revelations so far:

A number of Mr Trump’s leading advisers claimed they told the former president that he had lost the election and urged him to concede defeat, but saw their advice go unheard.

In the committee’s first hearings in June, former Attorney General Bill Barr said he informed Mr Trump that his allegations of widespread voter fraud were easily debunked and that his claims that the election had been stolen were “crazy stuff”.

Ivanka Trump, who was an influential voice in the White House throughout Mr Trump’s presidency, told the committee in videotaped testimony that she had accepted the top prosecutor’s opinion. “It affected my perspective,” she said. “I respect Attorney General Barr, so I accepted what he was saying.”

And Jason Miller, a senior adviser to Mr Trump’s re-election campaign, said the president was advised internally that he had lost the contest. He testified that the campaign’s data team told Mr Trump shortly after polls closed “in pretty blunt terms, that he was going to lose”.

Most of Mr Trump’s inner circle, including his campaign manager Bill Stepien, urged him not to declare victory on election night. But it was revealed that a drunk Rudy Giuliani, the former mayor of New York City and then an adviser to Mr Trump, pushed the president to seize the initiative.

Mr Miller told the committee that Mr Giuliani was “definitely intoxicated” as he advised Mr Trump to claim he had won. He said that even with results still coming in, Mr Giuliani suggested that the president “go and declare victory and say that we’d won it outright”.

In his testimony, Mr Stepien described the emergence of a “team normal”, consisting of those who accepted the results of the election, and “Rudy’s team”, who followed the false claims of election fraud peddled by several informal advisers to the president.

Mr Giuliani has denied he was intoxicated on election night.

In emotional testimony in June, several election workers who were singled out by Trump allies in their baseless fraud claims spoke of the abuse they had received in the wake of the election.

Georgia election worker Shaye Moss fought back tears as she told members that her life had been turned “upside down” after the Trump campaign accused her of committing fraud while counting ballots.

“I second-guess everything that I do,” she said. “It’s affected my life in a major way – in every way. All because of lies.”

And Arizona election chief Rusty Bowers recalled that he had been targeted by supporters of Mr Trump for refusing to call the election rigged. He said that a group, some of whom were armed, picketed his home while his severely ill daughter was in the house. She died just weeks later.

He said the group accused him of being “a paedophile and a pervert and a corrupt politician”.

Cassidy Hutchinson, a former top aide to White House Chief of Staff Mark Meadows, offered explosive testimony that Mr Trump knew that many of his supporters were armed before addressing them on 6 January.

Appearing as a surprise witness during the sixth hearings, Ms Hutchinson said Mr Trump personally knew that members of the crowd at his morning rally near the White House were armed because they were being turned away by Secret Service officers.

“I don’t [expletive] care that they have weapons. They’re not here to hurt me,” Ms Hutchinson said she heard the president say. “Let my people in. They can march to the Capitol from here.”

Her testimony offered the committee something they had been seeking to establish from the very beginning of proceedings – that Mr Trump knew there was a very real threat of violence and did nothing to stop it.

5. Trump intended to lead the mob to the Capitol

Some of Ms Hutchinson’s second-hand testimony was equally as explosive. She recounted how a White House official told her that the president had insisted on travelling to the Capitol after his White House rally – something he said he would do during his speech.

But when he learned his motorcade was going back to the White House due to safety concerns, he flew into a rage and attempted to grab the steering wheel as he wrestled with a Secret Service officer, she claimed.

“I’m the [expletive] president,” Mr Trump said, according to Hutchinson. “Take me up to the Capitol now.”

Since Ms Hutchinson’s testimony, a source close to the Secret Service has told CBS News that both the agent and driver travelling in the car with Mr Trump were willing to testify under oath that the former president did not physically attack either of them and never attempted to grab the steering wheel.

Mr Rosen claimed he rebuffed the president, telling him he had no legal authority to make such an order.

“That’s a terrible idea for the country. That’s not how we do things in the United States. There’s no legal authority to do that. There is a way to contest elections, you know, that happens all the time,” Mr Cipollone said.

During her closing testimony on 12 July, Liz Cheney, one of the committee’s two Republican members, dropped a bombshell when she stated that Mr Trump had tried to contact a witness due to appear before the committee.

“After our last hearing, President Trump tried to call a witness in our investigation. A witness you have not yet seen in these hearings,” Ms Cheney said. “That person declined to answer or respond to President Trump’s call and instead alerted their lawyer to the call. Their lawyer alerted us.”

Raising the possibility of witness-tampering charges, Ms Cheney said the allegations had been reported to the Department of Justice.

“Let me say one more time: we will take any effort to influence witness testimony very seriously,” she warned.

In hearings on 24 June, the panel was told that several leading proponents of claims that the election had been stolen, including Representatives Mo Brooks, Matt Gaetz, Andy Biggs, Louie Gohmert and Scott Perry, were among Republican members of congress who sought pardons from Mr Trump in the closing days of his presidency.

The committee played recorded testimony from several former White House staffers who spoke of the Republicans’ efforts to obtain immunity from prosecution in the wake of the Capitol riots.

Ms Hutchinson alleged that Mr Gaetz and Mr Brooks had advocated a “blanket pardon” for members involved in a December meeting to plan events for 6 January.

“The only reason I know to ask for a pardon is because you think you committed a crime,” said committee member Adam Kinzinger, a Republican