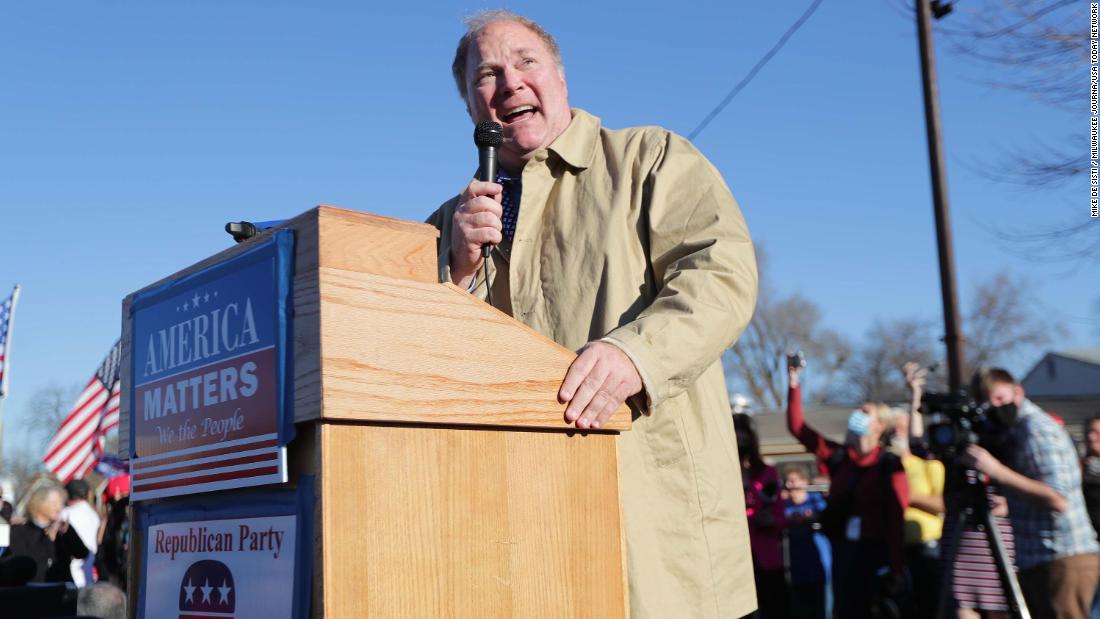 Wisconsin Assembly Speaker Robin Vos tapped Michael Gableman, a former state Supreme Court justice, to conduct the review — even though Gableman had publicly embraced conspiracy theories about President Joe Biden’s defeat of Donald Trump there last year before being chosen for the role.
In recent weeks, Gableman’s office has issued, and then backed off, subpoenas for testimony from officials in Wisconsin’s five largest counties. Some of his subpoenas have included errors or sought information that has already been made public.
Gableman has faced backlash after comparing a newspaper’s coverage of his probe to Nazi propaganda. And he has been criticized for consulting with Shiva Ayyadurai, a conspiracy theorist whose recent work on the partisan election review in Arizona was discredited.
Gableman has also admitted that he does not know how elections work.
“Most people, myself included, do not have a comprehensive understanding or even any understanding of how elections work,” he told the Milwaukee Journal Sentinel in an interview earlier this month.
The Wisconsin probe is part of a nationwide effort by Republicans to cast doubt on the legitimacy of Biden’s victory over Trump in the 2020 election. Partisan reviews in a series of states have turned over no evidence of widespread fraud. But they have served the political purpose of fueling suspicions about election integrity among Trump’s supporters.
For example, in Arizona, a company called Cyber Ninjas, hired by state Senate Republicans to review the 2.1 million ballots cast in Maricopa County, said its hand count was virtually identical to the county’s, but also used questionable methods to cast doubt on the legitimacy of tens of thousands of ballots.
Explanations by Maricopa County officials, nonpartisan elections experts and media fact-checkers undercut all of the Cyber Ninjas’ claims almost immediately — underscoring the reality that the problem in Arizona wasn’t with how the election was run, but rather with the lack of understanding of election laws and processes by Cyber Ninjas and its subcontractors. Still, the company’s initial report has provided fuel that Trump has used to advance his lies about the 2020 election.

‘This is not a serious investigation’

In a nine-page letter to Gableman last week, Wisconsin Attorney General Josh Kaul’s office said Gableman’s subpoenas of state elections records and more violated state law and exceeded the bounds of the probe.
“The subpoena’s document requests include demands that are overly broad, vague, unduly burdensome, and redundant of existing or already concluded investigations or inquiries,” the letter said.
Kaul, a Democrat, said in a statement that “no one should treat the results of this investigation as credible” and said Vos, the Republican state assembly speaker, should end it.
“This is not a serious investigation. Even if an investigation like this were justified — and it’s clearly not — this one suffers from glaring flaws that destroy any credibility that its results could have,” Kaul said.
Vos, for his part, issued a statement criticizing Kaul for criticizing Gableman.
“In order to restore confidence in our election system, Justice Gableman will continue his investigation,” Vos said.
His office did not respond to CNN’s request for comment about Kaul’s remarks, Gableman’s admission that he lacked “any understanding of how elections work” or Gableman’s work with Ayyadurai, the conspiracy theorist whose work in other states’ probes has been riddled with errors and omissions. CNN has not been able to reach Gableman for comment.
In a video posted earlier this month on a YouTube channel launched by his special counsel’s office, Gableman said that “the burden is on clerks to prove they conducted the 2020 elections lawfully.”
He said, without offering specific details, that there is “compelling evidence” that laws weren’t followed, and that there is “also evidence that ambiguities in the law were expansively interpreted.”
“We are not demanding that they disprove that the election may have been conducted unlawfully. Rather, we’re asking them to be accountable to the people of Wisconsin — those people who have serious questions about the elections and how it was conducted,” Gableman said in the video.
Gableman’s comments completely omitted the reality that many of those who doubt the integrity of the 2020 election do so because Trump and his allies have spent months repeating lies about widespread fraud, even though they have turned over no evidence to support those false claims.
In another YouTube video late last week, Gableman said his office offered mayors and local officials a “reprieve on the timing of their interviews” with the special counsel’s office.
“In cases where public officials are not interested in working with us, we have no alternative than to exercise the power granted to us by the state assembly in order to compel them to testify and produce the documents this office has requested,” Gableman said.
Gableman has repeatedly used his YouTube videos to criticize Democratic Gov. Tony Evers, who called the probe a “boondoggle” and said that “if I were a clerk I’d be lawyered up.”
“There should not be lawyers between the people of Wisconsin and their elected and appointed government officials,” Gableman said.
Gableman said in an interview that aired Sunday on WISN that his probe will also include investigating the “reliability of voting machines,” saying that “there have been a number of theories” about the machines.
“I don’t have sufficient evidence to make up my mind one way or the other,” he said when asked whether he believes those theories, without offering any evidence to support casting doubt on the accuracy of the state’s voting machines.
Gableman also faced criticism this month after he made reference in a radio interview to Adolf Hitler’s Nazi head of propaganda in criticizing the state’s largest newspaper, the Milwaukee Journal Sentinel, over its coverage of his probe.
“What they’re doing over at the Journal would make Joseph Goebbels blush,” Gableman said on “The Dan O’Donnell Show.”
Democratic state Rep. Lisa Subeck, who is Jewish, said that Gableman’s comments “clearly disqualify him” and that he should resign from the probe or be removed by Vos.