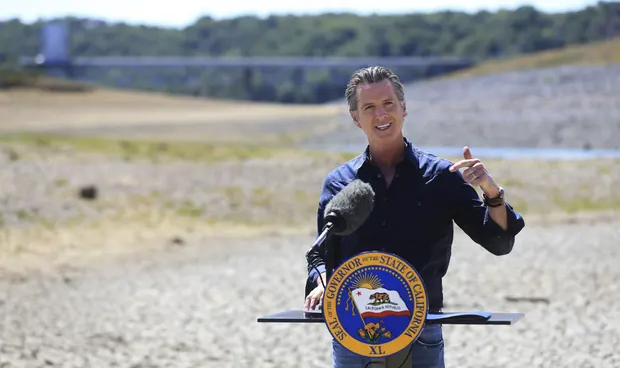 Why is this happening?

The recall election may seem like an oddity, considering Gavin Newsom, the Democratic governor, remains fairly popular across the state.

But in California, a small but vocal minority can make a recall election happen. According to state rules, a recall election will be called if 12% of people who voted in the last election sign a petition saying they want one.

A Republican-led effort to recall the governor, launched in early 2020, gained traction amid the pandemic. Some residents balked at the state’s strict Covid restrictions, while others saw California’s high death toll as a sign of Newsom’s leadership failures.

In April, the recall campaign announced it had enough valid signatures – 1,626,042 in total – to trigger an election.

How does a recall work?

California is one of 19 states that allow voters to recall and remove state officials from office before their terms end.

In California, a recall can happen at almost any time for any reason, if enough registered voters support it. Once the signature threshold is hit, voters get 30 days to strike their signatures from the recall petition – and if enough change their minds, the recall effort will fail. But Joshua Spivak, a senior fellow at the Hugh L Carey Institute for Government Reform at Wagner College and an expert on recalls, says that “seems quite unlikely” this time around.

Next, officials will run an estimate of how much the recall election will cost, and the state’s lieutenant governor will set a date for the election.

On election day, voters will be asked two questions: whether they want to recall Newsom, yes or no – and if more than 50% say “yes”, who should replace him?

Who wants to recall Newsom?

The campaign, spearheaded by the Republican former sheriff’s deputy Orrin Heatlie, has come out against the Newsom administration’s pandemic-era lockdowns, aid to undocumented immigrants and homeless residents, relatively high taxes and spending on social programs.

The effort has picked up financial support from big business donors and a few Silicon Valley venture capitalists, including the former Facebook executive Chamath Palihapitiya. Far-right movements including QAnon have also bolstered the effort – though recall organizers have tried to distance themselves from those groups following the deadly 6 January attack on the US capitol.

In a state that leans heavily liberal (Donald Trump lost in 2020 by 30 points), the recall petition was an unlikely success.

So how did the recall gain momentum?

Republicans have been trying to recall Newsom since he first took office. Five attempts failed to get enough valid signatures. But the sixth time was the charm.

This latest recall effort was launched in February 2020 – before the worst of the pandemic hit California. Recallers had 160 days, or until 17 November, to gather enough signatures. By that date, the campaign had just 749,196 signatures – not nearly enough.

But as coronavirus shut the state down, the Sacramento county superior court extended the deadline – arguing it had become “extremely difficult for petitioners to engage in signature-gathering activities for their proposed initiative”.

Around then, California entered its most severe, deadly phase of the pandemic. Conservatives protested against the governor’s strict lockdown measures, staging anti-mask rallies. Meanwhile, many of Newsom’s Democratic allies in the legislature worried he wasn’t acting fast enough to stem the wave of infections and deaths.

The governor didn’t help his case when he attended a dinner party at the Michelin-starred French Laundry in Napa with bigwig lobbyists – flaunting wealth and flouting mask requirements as the coronavirus death count ticked up.

In the following weeks, hospitals were overwhelmed with Covid patients and morgues with the dead. The state employment development department was swindled, on the governor’s watch, into paying billions in fraudulent unemployment claims as millions of jobless Californians struggled for aid.

As frustration grew, recallers were able to gather more than a million additional signatures.

How likely is the recall to succeed?

Newsom’s popularity peaked early in the pandemic, with an approval rating of 63% in May 2020. That figure dropped precipitously amid the last coronavirus surge but is rising again as the state recovers and reopens.

Recent polling from the Public Policy Institute of California found that 56% of likely voters oppose removing Newsom from office, and 5% are unsure. Newsom, who was elected to office with the support of more than 60% of voters, remains in a strong spot.

And the governor, aware that his political future hinges on the state’s recovery, has launched a number of big programs including the $100bn “California Comeback Plan” to send most Californians additional stimulus checks and provide billions in rent relief.

Moreover, “throughout California history, gubernatorial recalls have been largely unsuccessful,” Spivak said. Since 1913, there have been 55 attempts to recall the governor – and only one effort qualified for the ballot, in 2003.That election saw Gray Davis, an unpopular Democrat, removed from office and replaced by the Republican Arnold Schwarzenegger – who was able to leverage his acting fame and family political connections.

There’s no limit to the number of candidates who can challenge Newsom – and a number of hopefuls have already launched their campaigns. The businessman John Cox is currently touring with a domesticated Kodiak bear. Kevin Faulconer, the former mayor of San Diego, and Doug Ose, a former US representative, are also challenging the governor, as is Caitlyn Jenner, the former Olympic athlete and reality TV star.

None of these candidates would stand any real chance against Newsom in a general election. Cox, who ran against Newsom in 2018, lost by nearly 24 points. “The recall can be a rallying cry, in California and across the county,” Mindy Romero, the founder of the Center for Inclusive Democracy, a non-partisan research organization, told the Guardian in March. “For the Republican candidates running against the governor, it can raise their national profiles.”

Notably missing from the race so far: a Democrat. The party has largely coalesced around Newsom with progressives and moderates, in California and in DC, throwing their support behind the governor.

Still, Spivak said, the coming months could bring political surprises. And at the very least – they will bring a bevy for political stunts as more and more candidates announce runs. “I think we’re going to see quite a bit of craziness,” he said.