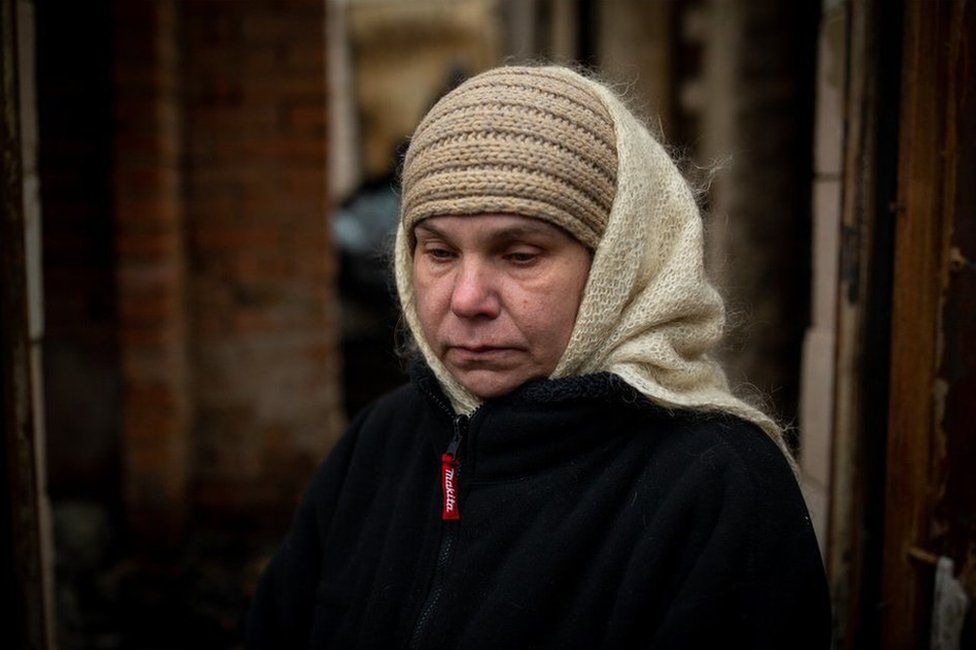 Volodymyr Abramov was desperately trying to put out the fire in his home, in the Kyiv suburb of Bucha, calling out for his son-in-law to help.

Russian troops had smashed through the front gates of Volodymyr’s home, opened fire at the house, and dragged Volodymyr, 72, his daughter Iryna, 48, and her husband Oleg, 40, out into the yard.

The soldiers took Oleg out beyond the gate onto the pavement, Volodymyr said, and threw a grenade in through the front door of the house that exploded with a deafening bang and set the house on fire.

Volodymyr grabbed a small fire extinguisher and tried in vain to extinguish the flames. “Where is Oleg? Oleg will help!” he shouted to his daughter.

But the reply came from one of the Russian soldiers, he said.

“Oleg will not help you anymore.”

They found Oleg on the pavement outside the gate, and it was clear from the way he was lying that he had been forced to kneel and shot in the head at point blank range, Iryna said. He was a welder who lived a quiet life on the corner of Yablonska Street in Bucha, who was taken out of his home and killed.

The killing is one of scores – if not hundreds – being uncovered in Bucha after Russian troops withdrew from the Kyiv suburb recently. The mayor, Anatoliy Fedoruk, said on Monday that at least 300 civilians had been killed. There is no official tally yet.

Russia has denied any involvement in the atrocities. But its burned-out tanks litter the city. On the grounds of a church, there is an open mass grave with the dead still inside, some in black body bags, some loose in the sand. On the roads, there are bullet-riddled civilian cars – at least one with a body still inside. Houses are caved in by shelling, their driveways ploughed over by tanks. Residents have described Russian soldiers shooting civilians outside their homes with no provocation, and satellite imagery shows that bodies were lying in the streets while the Russians were still in control.

The Russian soldiers who killed Oleg Abramov “did not ask him anything”, his wife Iryna said.

“They didn’t ask anything or say anything, they just killed him,” she said. “They only told him to take off his shirt, kneel down, and they shot him.”

She wept on Tuesday as she stood on the spot where he was killed, where a dark patch of blood was still visible on the street. When she ran out and found his disfigured body, the four Russian soldiers who dragged him out were standing casually drinking water, she said. She screamed at them to shoot her, and one raised his gun, then lowered it, then raised it again, and lowered it, until Volodymyr dragged her back inside the gate.

“Those soldiers told us we had three minutes to leave and they forced us to run in our slippers,” Volodymyr said. “Bucha was like an apocalypse – dead bodies everywhere, the streets full of smoke.”

Volodymyr and Iryna had no choice but to leave Oleg’s body lying on the street and it lay there for nearly a month while they sheltered at a relative’s house nearby. When it was safe to return, Volodymyr tried to bury his son-in-law on a rough patch of earth by the pavement, and the half-dug hole was still visible there on Tuesday.

But exhausted by the effort, and afraid of Russian soldiers, Volodymyr carried Oleg back inside the yard and laid him there. Later, Ukrainian soldiers loaded the body into a van, Volodymyr said, and took it away. “I have no idea how we are going to find it now,” he said.

Ukrainian authorities have now cleared the bodies off the streets of Bucha but there are fears more will be found in the basements and yards of private homes. Officials have only just begun the process of cataloguing the horrors. And so great is the damage in Bucha, it is hard to imagine the scale of the reconstruction needed to restore it to the attractive suburb it once was.

Along one road through the town on Tuesday, where burned-out tanks were piled up and almost every house was destroyed, 84-year-old Hryhoriy Zamohylnyi was sweeping the street, as if oblivious to the total destruction around him. Somehow, his home was intact – the only building left undamaged along the whole stretch of road.

“I saw the war with the Germans and now this war with the Russians,” said Zamohylnyi, a former engineer, born and raised in Bucha. “What you see here is animal cruelty,” he said.

Addressing the UN security council on Tuesday, the Ukrainian president, Volodymyr Zelensky, accused the Russians of committing the worst crimes since World War Two, and called for those responsible to be tried as the Nazis were in Nuremberg.

“The Russian military searched for and purposefully killed anyone who served our country,” he said. “They killed entire families, adults and children, and they tried to burn the bodies.”

Ukraine has begun a war crimes investigation into Russia’s actions in Bucha and nearby Irpin. It says 410 bodies have been found across the two suburbs so far.

There are fears now that more atrocities will be found as the Russians retreat further and more suburbs are opened up – more bodies in the streets, more mass graves. Volodymyr and Iryna Abramov are only looking for one body, and their fear is that they will never find it.

“He was just a peaceful man, a family man, a welder, who struggled with a spine fracture and was disabled all his life,” Volodymyr said.

“Just before he died, while I was in the yard, I saw him briefly through the open gate, on his knees, and he said his final words. He asked them why.”

Rodion Miroshynk and Daria Sipigina contributed to this report. Photographs by Joel Gunter.