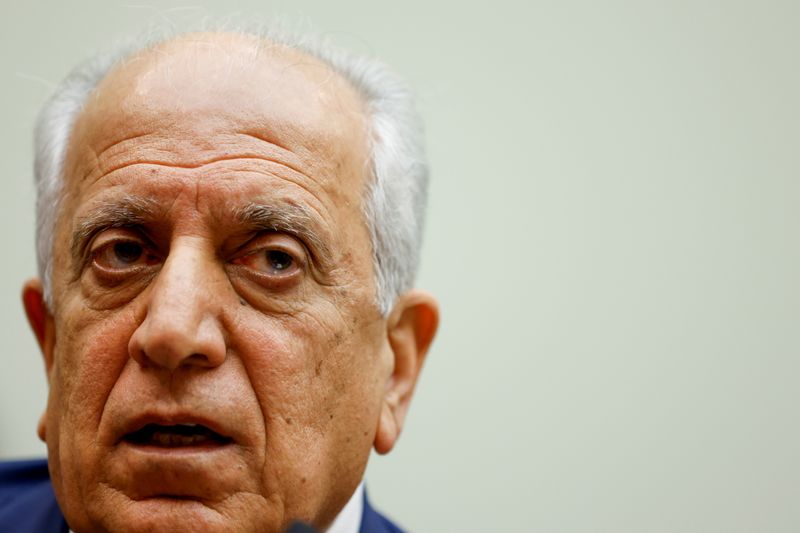 FILE PHOTO: U.S. Special Representative for Afghanistan Reconciliation Zalmay Khalilzad testifies about the potential withdrawal of U.S. military forces from Afghanistan at a hearing before the House Foreign Affairs Committee on Capitol Hill in Washington, U.S. May 18, 2021. REUTERS/Jonathan Ernst

WASHINGTON (Reuters) – In a luxury hotel along Doha’s coastline last year, Zalmay Khalilzad smiled as he shook hands with the Taliban’s co-founder Mullah Baradar in front of journalists and diplomats from around the world.

“We have signed an agreement with the Taliban that achieves U.S. objectives,” Khalilzad, the United States’ special representative for Afghanistan reconciliation, wrote on Twitter later that night.

Twenty months later, the U.S.-backed Afghan government collapsed as the Taliban swept through the country at lightning speed and marched into Kabul unopposed. Khalilzad was left seeking the militant group’s help in a chaotic U.S. evacuation from Kabul.

Current and former U.S. officials told Reuters that in the three years Khalilzad has been in the role, he became the face of one of the largest U.S. diplomatic failures in recent memory.

U.S. officials, who spoke on the condition of anonymity, said the veteran American diplomat relinquished leverage to the militant group, continuously undermined the Afghan government, and had little interest in hearing different viewpoints within the U.S. government.

“How does he still have a job?” a U.S. official asked. “There is no longer any Afghan reconciliation left.”

Some officials, lawmakers and foreign policy experts said that he is one of the few U.S. diplomats to have relations with the Taliban and was simply following orders from both U.S. Presidents Donald Trump and Joe Biden: get all U.S. troops out of Afghanistan.

“Khalilzad looks bad. But I think that he was dutiful in the sense that he did what he was asked to do,” said Michael Kugelman of the Wilson Center think-tank.

Khalilzad, while a major figure in America’s humiliating end to a 20-year involvement in Afghanistan, was one of many people who made mistakes during four administrations – two Republican and two Democratic.

GAVE AWAY THE FARM

When Khalilzad, who was born in the northern Afghan city of Mazar-i-Sharif, was appointed to be the special envoy in 2018, there was a growing political desire to leave Afghanistan.

Having campaigned on ending “the endless wars”, Trump had publicly talked about his desire to remove thousands of U.S. troops in Afghanistan.

But officials said that despite his desire to leave, Trump had shown that he could order a withdrawal only to walk it back, like he did in Syria.

In negotiations, officials said Khalilzad gave away too much early by making clear that Washington was looking to withdraw all of its troops.

A major concession, according to the officials, was Khalilzad agreeing to the Taliban’s demand that President Ashraf Ghani release 5,000 Taliban prisoners.

A second U.S. official said that move dealt a major blow to the Afghan government’s morale.

Representative Michael McCaul, the top Republican on the House of Representatives Foreign Affairs Committee, said he thought Khalilzad had been given an impossible assignment.

Afghan officials were skeptical from the moment the Trump administration entered into direct talks with the Taliban, without the Afghan government at the table.

Roya Rahmani, who was the Afghan ambassador to Washington until July, recalled Khalilzad’s refrain earlier in the negotiations that “nothing is agreed until everything is agreed” – a message meant to reassure Afghans and Americans alike.

“What happened was there was an agreement that only ensured that the Taliban – during that period of time – would not attack U.S. personnel and soldiers, but then everything else is allowed,” Rahmani said in an interview this week.

During the negotiations, the United States and Afghan government clashed publicly.

In March 2019, Hamdullah Mohib, Ghani’s national security adviser, leveled a fierce attack on Khalilzad’s conduct, questioning whether he was perhaps seeking power himself.

“The perception in Afghanistan and people in government think that perhaps, perhaps all this talk is to create a caretaker government of which he will then become the viceroy,” Mohib said.

The comments by Mohib were not new.

As the U.S. ambassador in Afghanistan from 2003-05, Khalilzad played an unusually hands-on role in Afghan politics and Afghans referred to him as the “Viceroy of Kabul.”

There was also widespread frustration within the Trump and Biden administrations that Khalilzad did little to listen to the Pentagon, Treasury Department and even parts of the White House, officials said.

A source familiar with the matter defended Khalilzad, saying the U.S. military was giving conflicting messages to the Afghan government, potentially making them think that Washington may reverse its plans to depart.

White House officials have said in recent days that there are no discussions about firing people for a messy withdrawal that led to the deaths of 13 U.S. troops and scores of Afghans and left behind tens of thousands of people who helped the U.S. government.

One U.S. official said that Khalilzad’s relationships with senior Taliban leaders were instrumental in getting the group to help protect Kabul’s airport.

With U.S. citizens and at-risk Afghans still looking to get out of Afghanistan and no American diplomatic presence there, officials said that Khalilzad could still play an important role as an interlocutor to the Taliban.

But some lawmakers have pointed the finger at Khalilzad as the architect of the U.S. withdrawal from Afghanistan and say he must go.

“In light of this catastrophe, Ambassador Khalilzad should resign immediately or be relieved from his position,” Waltz said.