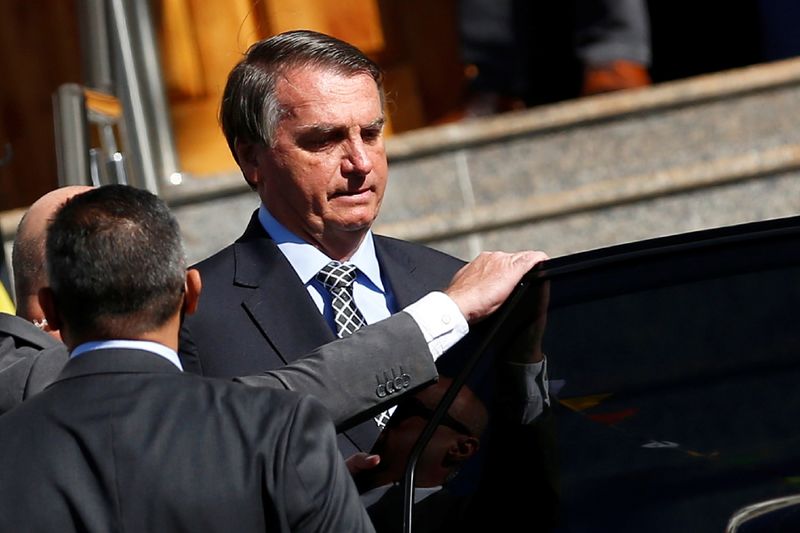 Brazil’s President Jair Bolsonaro gets in a vehicle after attending Mass at a Catholic church in Brasilia, Brazil July 1, 2021. REUTERS/Adriano Machado

RIO DE JANEIRO (Reuters) – Brazilian President Jair Bolsonaro said on Thursday he would hand over power to whoever wins next year’s presidential election cleanly – but not if there is any fraud.

His comments will do little to dispel the concerns of his critics, who fear that the far-right former army captain will not accept any election loss in next year’s vote. Bolsonaro is almost certain to face his political nemesis, former leftist President Luiz Inacio Lula da Silva. Polls show Lula ahead.

“I’ll hand over the presidential sash to whoever wins the election cleanly,” Bolsonaro said in a weekly address via social media. “Not with fraud.”

Since his 2018 election victory, Bolsonaro has made baseless allegations of voter fraud in Brazil, which critics say could lay the groundwork to challenge upcoming elections in the same vein as his political idol, former U.S. President Donald Trump.

Bolsonaro backed Trump’s claims of a stolen election last year, which culminated in a deadly Jan. 6 assault on the Capitol building in Washington by Trump supporters.

In recent months, Bolsonaro has been touting a bill for printed ballots rather than Brazil’s modern computer voting. He has said the printed ballots will be easier to audit, and are thus more likely to avoid fraud. Few experts agree, and the bill has yet to gain much traction in Congress.

On Thursday, Bolsonaro said he was “alerting” people about the possibility of problems if the current electronic system remains in place.

“The people won’t accept it,” he said.

Bolsonaro also said his government was in talks about extending an emergency coronavirus aid package for two or three more months.