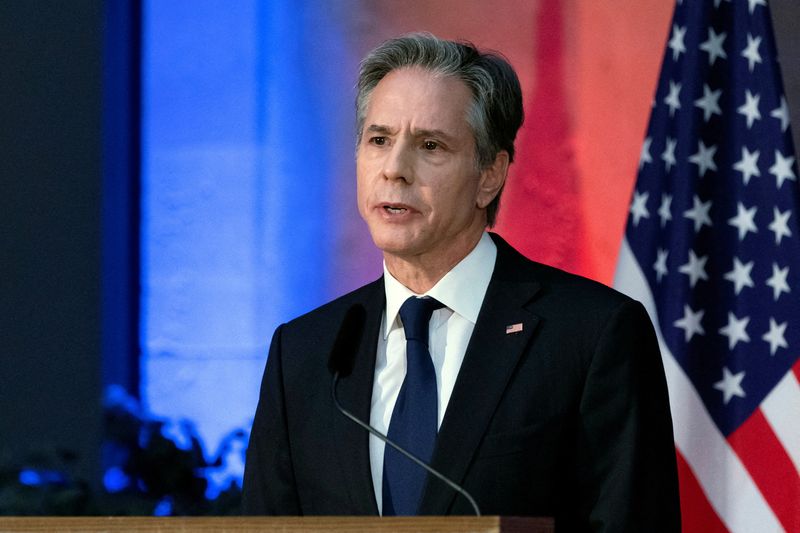 FILE PHOTO: U.S. Secretary of State Antony Blinken speaks at the Berlin-Brandenburg Academy of Sciences and Humanities following his talks on the Ukraine crisis in Berlin, Germany, January 20, 2022. Alex Brandon/Pool via REUTERS/File Photo

WASHINGTON (Reuters) – In a further step to strengthen bilateral relations, U.S. Secretary of State Antony Blinken discussed the need for reform in the Palestinian Authority in a phone call on Monday with President Mahmoud Abbas, the State Department said.

President Joe Biden has sought to repair ties weakened when his predecessor, President Donald Trump, slashed aid to Palestinians in the Israeli-occupied West Bank and Gaza and closed a U.S. consulate for Palestinians in Jerusalem.

The Biden administration has restored aid and pledged to reopen the consulate over Israeli objections, while urging Abbas, 86, to change several policies including payments his self-rule authority makes to Palestinians held in Israeli jails.

Briefing reporters on Monday, State Department spokesperson Ned Price did not mention the prisoner stipends but said Blinken and Abbas discussed “the need for reform within the Palestinian Authority.”

The two also discussed “the need to improve quality of life for the Palestinian people in tangible ways,” Price said.

In a readout of the phone call, Abbas’ office did not mention any discussion of reform within the authority, which exercises limited self-rule in West Bank territory Israel captured in the 1967 Middle East war.

Abbas told Blinken that Israel must “stop the abuse of prisoners and … the withholding of taxes.” Israel in 2018 began deducting the value of the prisoner stipends from taxes it collects on the Palestinian Authority’s behalf and transfers to it monthly.

Israel and the United States say the stipends, dispersed monthly to prisoners, their relatives and the families of Palestinians killed for allegedly carrying out attacks, encourage further violence.

The Palestinians consider them a form of welfare for inmates and families they regard as national heroes.

(Reporting by Humeyra Pamuk, Rami Ayyub and Simon Lewis in Washington and Ali Sawafta in Ramallah; Editing by Rosalba O’Brien and Howard Goller)