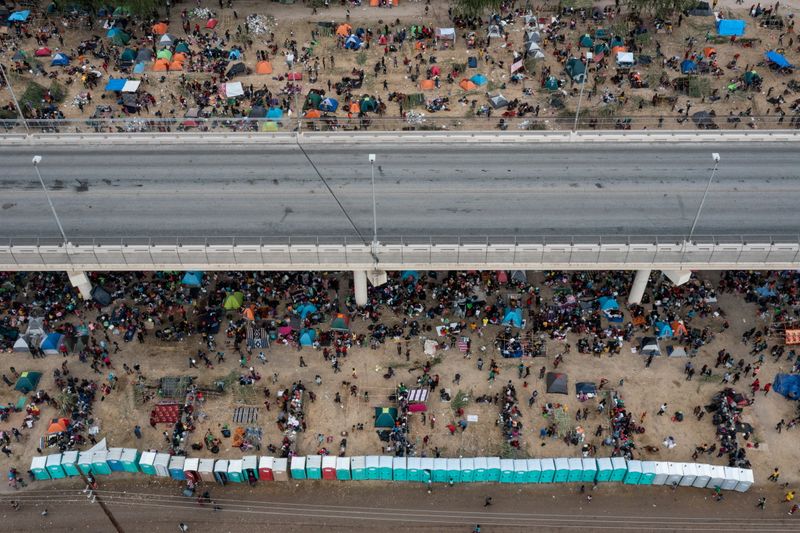 FILE PHOTO: Some thousands of migrants take shelter as they await to be processed near the Del Rio International Bridge after crossing the Rio Grande river into the U.S. from Ciudad Acuna in Del Rio, Texas, September 18, 2021. REUTERS/Adrees Latif

MEXICO CITY (Reuters) – U.S. Secretary of State Anthony Blinken on Friday warned Haitian migrants that they would not succeed in reaching the United States, while his Mexican counterpart lamented that many had been tricked into undergoing the long trek with false hopes.

The top U.S. diplomat visited Mexico to present a new joint security plan https://www.reuters.com/world/americas/blinken-bids-revive-fraught-us-mexico-relations-amid-new-security-accord-talks-2021-10-08 and mend ties with an ally increasingly relied upon by the Biden administration to act as a buffer and stem the flow of migrants heading to the United States.

“The journey is profoundly dangerous and it will not succeed,” Blinken told a news conference in Mexico’s capital when asked about how the United States was ensuring humane treatment of migrants.

Blinken said U.S. and Mexican officials are in “close contact” over a jump in Haitian migrants passing through Mexico, many having traveled from South America where they had initially settled. A border encampment in Del Rio, Texas in recent weeks grew at one point to 14,000 migrants, mostly from Haiti.

The United States has since expelled several thousand people to Haiti while allowing others to pursue U.S. migration cases, while Mexico also recently began flights to send people back to Haiti. https://www.reuters.com/article/us-usa-immigration-mexico-haiti/migrants-hopes-dashed-by-surprise-deportation-to-haiti-from-u-s-border-idUSKBN2GY1AF

Migrant rights groups have denounced deportations to Haiti, which is struggling with violence, poverty and political turmoil.

“Deportation to Haiti was not the right approach, was not humane,” the United Nations’ top refugee official Filippo Grandi said on Friday, adding that the United States and Mexico had sometimes deported people “without due process.”

Speaking alongside Blinken, Mexico Foreign Minister Marcelo Ebrard said many Haitian migrants who trekked from South America to the border had been duped into thinking they could easily obtain legal residency in the United States.

For the thousands now in limbo in Mexico, he said the country could take them in and offer asylum.

“If 15,000 people come from Haiti, they want to work, they want to be here, it’s not a problem for Mexico,” Ebrard said, adding however that finding job opportunities was “not easy.”

Mexico’s asylum agency https://www.reuters.com/world/americas/their-prospects-dim-haitian-migrants-strain-mexicos-asylum-system-2021-10-05 has been strained by soaring numbers of requests from Haitians, many of whom are not likely to be granted refugee status because they left Haiti for economic reasons.

Mexico distributed visas in 2019 to let an influx of Central Americans work and travel freely, but stopped after then-U.S. President Donald Trump threatened trade tariffs if Mexico did not curb the flow of people reaching the border.

Ebrard said he and Blinken did not discuss ‘remain in Mexico,’ one of Trump’s hardline migration policies under fire by asylum advocates, which his successor Biden is attempting to end. The policy forces asylum seekers who cross at the U.S.-Mexican border to wait in Mexico for their court cases.