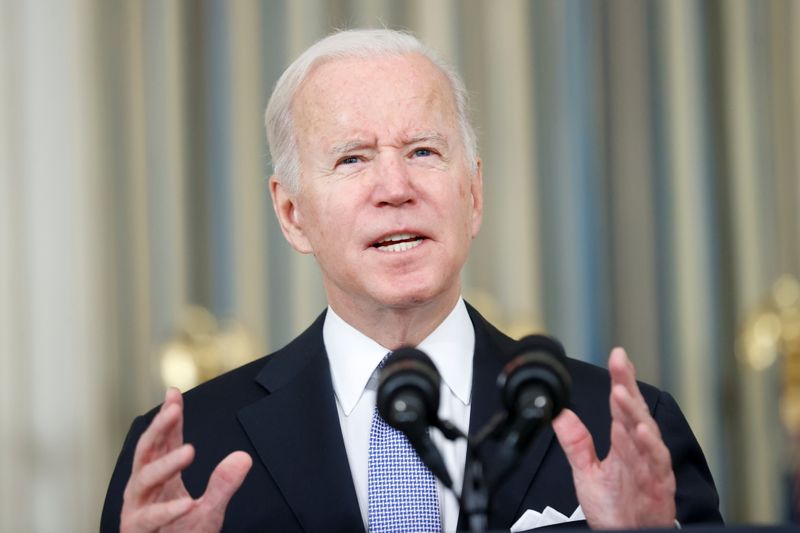 By Humeyra Pamuk and Simon Lewis

WASHINGTON (Reuters) – President Joe Biden is getting ready to deliver on a key campaign promise by convening a Summit for Democracy: a first-of-its kind gathering of more than 100 countries to help stop democratic backsliding and erosion of rights and freedoms worldwide.

But rights advocates are questioning whether the virtual event can push those world leaders who are invited, some accused of harboring authoritarian tendencies, to take meaningful action.

“If the summit is to be anything more than just another meeting, each attendee, including the United States, will need to follow through on meaningful commitments on democracy and rights issues in the year ahead,” said Annie Boyajian, vice president for policy and advocacy at Freedom House, a non-profit group specializing in human rights and democracy.

Administration officials say the December event is just the “launch” of a longer conversation about democracy and that countries will need to fulfill the reforms they pledged to be invited to the follow-up summit planned next year.

The event – to be held on Dec. 9 and 10 – is a test of Biden’s longstanding claim, announced in his first foreign policy address as president in February, that the United States would return to global leadership under his tenure to face down authoritarian forces led by China and Russia.

A tentative invite list first reported by Politico and confirmed by a source familiar with the matter shows that the event will bring together mature democracies such as France and Sweden but also countries including Philippines and Poland, where activists say democracy is under threat. In Asia, some U.S. allies such as Japan and South Korea were invited, while others like Thailand and Vietnam were not.

Representation from the Middle East was slim with Israel and Iraq among the few countries invited and notable U.S. allies such as Egypt and NATO partner Turkey absent from the list.

Rights groups praise Biden’s pledge to reinstate the promotion of rights and freedoms as a foreign policy priority, after the disinterested approach of his predecessor Donald Trump, who openly praised strongmen such as Egyptian President Abdel Fatah al-Sisi and Russian leader Vladimir Putin.

They also say the invitation to countries with problematic human rights records raises doubts about the credibility of the event, but at the same time illustrates the administration’s struggle to balance wider U.S. national security interests, such as countering a rising China, with higher ideals.

“Clearly, strategic considerations about countering China are at play in inviting very troubled, backsliding democracies like India and the Philippines that are in China’s neighborhood,” said Amy Hawthorne, research director at the Project on Middle East Democracy, an advocacy group.

“The same might be true for inviting deeply flawed democracy Iraq, the neighbor of U.S. adversary, the Iranian theocracy,” she added.

Philippines President Rodrigo Duterte, who has in the past stated he does not “care about human rights”, and Indian President Narendra Modi, who advocacy group Freedom House said is driving India toward authoritarianism, will be among those discussing with Biden how to help democracy flourish globally.

An official at the Philippines’ foreign ministry confirmed Duterte was invited to the online forum and said Washington had imposed “absolutely no conditions” on his attendance. The country’s government was still considering whether to participate, the official said.

A senior U.S. official involved in the planning of the summit told Reuters that invites were sent to countries with different experiences of democracy from all regions of the world. “This was not about endorsing, ‘You’re a democracy, you are not a democracy.’ That is not the process we went through,” the official said.

Biden administration officials say they had to “make choices” to ensure regional diversity and broad participation.

Human rights groups said that with only weeks until the summit it was unclear how Washington would monitor implementation of commitments and hold the leaders who participate to their word.

‘A PLACE OF HUMILITY’

Poland, which is locked in a feud with the European Union over what Brussels says is democratic backsliding, was invited, but officials there took umbrage at an earlier message from Washington that appeared to place conditions on the invitation, according to a Polish government source.

The earlier email contained a list of suggested actions that would demonstrate Poland’s commitment to freedom and democracy, including respect for LGBTQI rights – a major sore point in Washington’s dealings with Poland’s right-wing government that has moved to restrict gay rights.

U.S. officials said they did not dictate any conditions but called on invited countries to come forward with commitments to take action.

“The idea has never been to prescribe or to be prescriptive,” said one of the officials.

The United States would also make its own commitments, the official added, as Washington faces skepticism about the health of its own democracy. After losing the November 2020 election to Biden, Trump’s false claims of fraud paved the way for his supporters’ Jan. 6 assault on the U.S. Capitol, an unprecedented episode that stunned foreign governments and armed authoritarian leaders with cause to question the robustness of American democracy.

“In all of our diplomatic communications around the summit, we are starting from a place of humility and recognizing that no democracy, including of course the United States, is perfect,” said a second administration official.