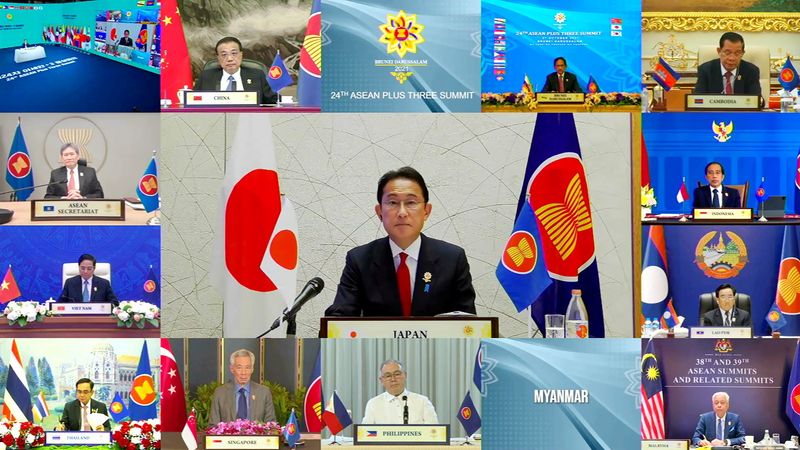 BANDAR SERI BEGAWAN (Reuters) -President Joe Biden said on Wednesday the United States would stand with Southeast Asian allies in defending freedom of the seas, democracy and human rights and backed efforts to hold the Myanmar junta accountable to its commitments to peace.

Southeast Asia has become a strategic battleground between the United States and China, which controls most of the South China Sea and has turned up military and political pressure on fiercely democratic Taiwan, a self-ruled island it considers its own.

Australia and the Association of Southeast Asian Nations (ASEAN) agreed on Wednesday at a virtual regional summit to establish a “comprehensive strategic partnership”, a sign of Canberra’s ambition to play a bigger role in the region.

Biden joined Southeast Asian leaders in rebuking Myanmar’s junta as the summit opened on Tuesday without a representative from the country following its top general’s exclusion for ignoring peace proposals.

“In Myanmar, we must address the tragedy caused by the military coup which is increasingly undermining regional stability,” Biden said on Wednesday.

“The United States stands for the people of Myanmar and calls for military regime to end the violence, release all political prisoners and return to the path of democracy.”

He also said the United States was deeply concerned by “China’s coercive and proactive actions” across the Taiwan Strait, a waterway linking the island and the mainland.

Tensions between Taiwan and China have escalated in recent weeks as Beijing raises military and political pressure.

That has included repeated missions by Chinese warplanes in Taiwan’s air defence identification zone, or ADIZ, which covers a broader area than Taiwan’s territorial air space which Taiwan monitors and patrols to give it more time to respond to any threats.

China has never renounced the use of force to ensure eventual unification with Taiwan.

“The South China Sea is our common home,” he said.

Biden also said he would speak out for “human rights in Xinjiang and Tibet (and) the rights of the people of Hong Kong”.

China denies human rights abuses in farwestern Xinjiang and the Himalayan region of Tibet. It also denies meddling with freedoms in the former British colony of Hong Kong.

Biden also announced discussions with partners in the IndoPacific region would start to develop a framework “that will position all of our economies for the future”.

“We look forward to working together with digital economy standards on infrastructure and regional connectivity, on supply chain resilience and anti-corruption and worker standards and so much more,” he said

Critics of U.S. strategy for the region point to its lack of an economic component after former President Donald Trump withdrew from the trade deal now known as the Comprehensive and Progressive Agreement for Trans-Pacific Partnership in 2017.

“I also mentioned human rights situations in Hong Kong and Xinjiang, as well as the importance of peace and stability in the Taiwan strait,” he said.

Australian Prime Minister Scott Morrison said the Australia-ASEAN pact would strengthen diplomatic and security ties and promised Canberra would “back it with substance”.

“This milestone underscores Australia’s commitment to ASEAN’s central role in the Indo-Pacific and positions our partnership for the future,” he said in a joint statement with Foreign Minister Marise Payne.

Brunei, serving as chair of ASEAN, said the agreement “marked a new chapter in relations.”

After the announcement, Australia said it would invest $154 million in projects in Southeast Asia on health and energy security, counter-terrorism, fighting transnational crime, plus hundreds of scholarships.

Morrison sought to reassure ASEAN that a trilateral security pact agreed last month between the United States, Britain and Australia, under which Australia will get access to nuclear-powered submarines, would not be a threat to the region.