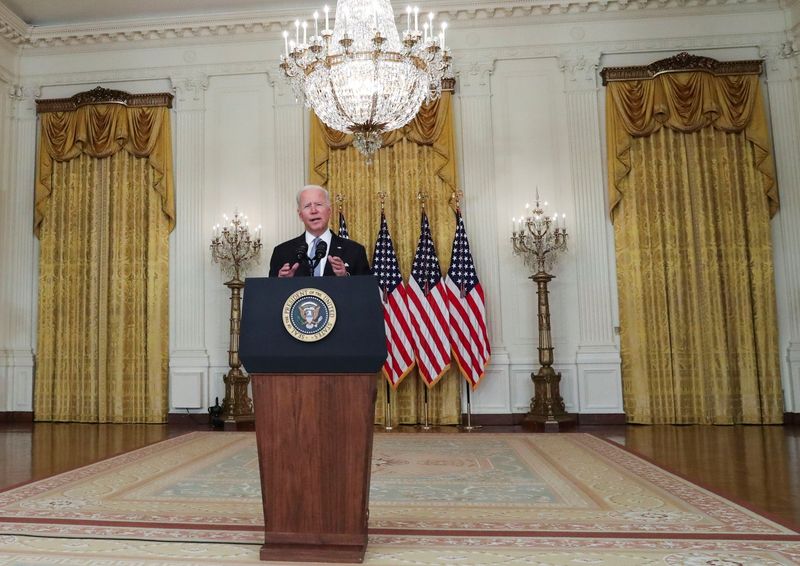 FILE PHOTO: U.S. President Joe Biden delivers remarks on the crisis in Afghanistan during a speech in the East Room at the White House in Washington, U.S., August 16, 2021. REUTERS/Leah Millis

By Steve Holland and Patricia Zengerle

WASHINGTON (Reuters) – When President Joe Biden appeared in the White House East Room on July 8 to stress that the U.S. pullout from Afghanistan was proceeding apace, he declared that a Taliban takeover of the country was not inevitable.

Five weeks later, the Taliban is in charge, scenes of chaos at the Kabul airport from the evacuation of Americans and U.S.-aligned Afghan citizens has transfixed the world, and President Biden is scrambling to defend himself from a series of miscalculations that have damaged U.S. credibility.

While insisting that “the buck stops with me,” Biden has doled out blame to others over America’s humiliating end to the 20-year involvement in Afghanistan that included missteps by four administrations – two Republican and two Democratic.

He has assailed the Afghan military for refusing to fight, denounced the now-ousted Afghan government and declared he inherited a bad withdrawal agreement from his Republican predecessor Donald Trump.

“I made a commitment to the American people when I ran for President that I would bring America’s military involvement in Afghanistan to an end.  And while it’s been hard and messy – and yes, far from perfect – I’ve honored that commitment,” Biden said in a speech on Monday.

President Biden came to office promoting himself as an international statesman with a steady hand on the tiller after Trump’s four storm-tossed years in office.

He quickly rejoined international agreements abandoned by Trump and sought to rejuvenate traditional alliances that Trump had spurned.

But his first big international challenge is generating an intense political backlash as Democrats and Republicans alike raise questions about his strategy.

A prediction by U.S. intelligence that the Taliban could be held off for three months following U.S. withdrawal proved to be wrong. U.S. military commanders who sought a more deliberate approach to the withdrawal were dismissed.

Biden’s national security adviser Jake Sullivan took the White House podium on Tuesday to offer a broad defense of Biden’s actions. He said that signaling support for the Afghan government “was a considered judgment” that did not save it, however.

“When you conclude 20 years of military action in a civil war in another country, with the impacts of 20 years of decisions that have piled up, you have to make a lot of hard calls. None with clean outcomes,” Sullivan said.

Members of the U.S. Congress, increasingly frustrated with events in Afghanistan, want to investigate what went wrong.

Senator Mark Warner, the Democratic Intelligence Committee chairman, had said on Monday he intended to work with other committees “to ask tough but necessary questions” about why the United States was not better prepared for the collapse of the Afghan government.

“The security and humanitarian crisis now unfolding in Afghanistan could have been avoided if you had done any planning,” Republicans on the House of Representatives Armed Services Committee said in a letter to the White House on Tuesday.

The crisis appears to have taken a toll. Biden’s approval rating dropped by 7 percentage points and hit its lowest level – 46% – since he took office in January, a Reuters-Ipsos poll conducted on Monday found.

Biden, managing the crisis from the presidential retreat of Camp David in Maryland’s Catoctin mountains, went several days without talking to any foreign leaders about Afghanistan. He spoke to British Prime Minister Boris Johnson on Tuesday.

“The prime minister stressed the importance of not losing the gains made in Afghanistan over the last 20 years, or protecting ourselves against any emerging threat from terrorism and of continuing to support the people of Afghanistan,” said a Downing Street spokesman.

Former President George W. Bush, who began the “war on terror” in Afghanistan in response to the Sept. 11, 2001, attacks and started a second war in Iraq in 2003, sounded a note of regret in a statement issued late on Monday with his wife, Laura Bush.

“Our hearts are heavy for both the Afghan people who have suffered so much and for the Americans and NATO allies who have sacrificed so much,” they said. “The Afghans now at greatest risk are the same ones who have been on the forefront of progress inside their nation.”

Sullivan, however, argued on Tuesday that while the images from the airport were “heartbreaking” Biden “had to think about the human costs of the alternative path as well, which was to stay in the middle of a civil conflict in Afghanistan.”