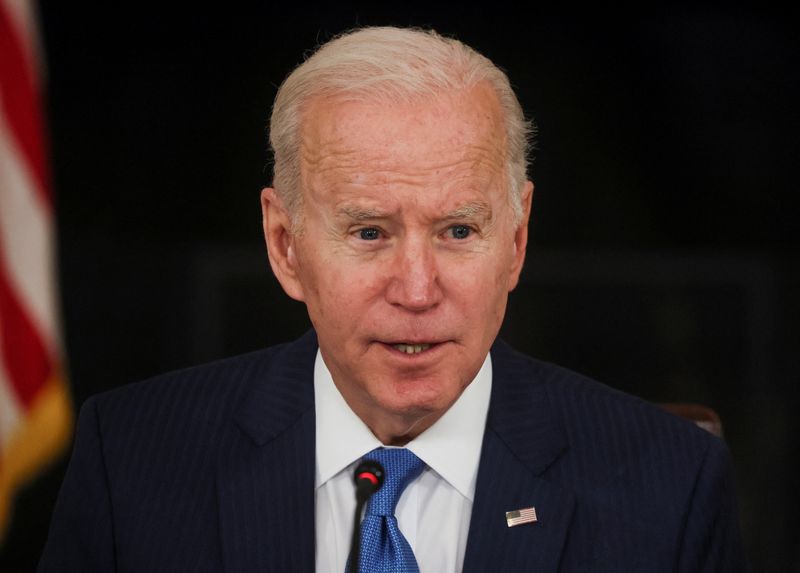 FILE PHOTO: U.S. President Joe Biden speaks during a roundtable with CEOs of utilities to discuss the ‘Build Back Better’ agenda, in the State Dining Room at the White House in Washington, U.S., February 9, 2022. REUTERS/Brendan McDermid

By Kanishka Singh and Timothy Gardner

(Reuters) -U.S. President Joe Biden and King Salman of Saudi Arabia discussed energy supplies in the face of soaring fuel prices and developments in the Middle East, including Iran and Yemen, in a telephone call on Wednesday.

“The two leaders committed to ensuring the stability of global energy supplies,” the White House said in a statement.

He emphasized the need to maintain the supply agreement OPEC has with its allies including Russia, a group known as OPEC+.

Last week, OPEC+ agreed to stick to moderate rises in its oil output, with the group struggling to meet existing targets and wary of responding to calls on its strained capacity for more crude from top consumers to cap surging prices.

Global crude prices, which have rallied about 20% this year, are likely to surpass $100 a barrel because of a weaker-than- expected hit to demand from the Omicron variant of coronavirus, analysts have said.

High oil prices are a risk to the Biden administration ahead of November’s congressional elections in which his fellow Democrats will defend slim majorities in the Senate and U.S. House of Representatives.

Last year, the administration attempted to push down oil prices by organizing a drawdown of emergency oil reserves in concert with large consumers in Asia, including China, but prices chilled only temporarily.

A U.S. source familiar with the call said, “Saudi Arabia has historically played a vital role in ensuring global energy markets are well supplied to support strong and resilient economies.

“The president noted that it is especially important now, during this time of geopolitical instability and global recovery,” said the source, who spoke on condition of anonymity.

Oil has also been supported by the tension in Ukraine as Russia has put more than 100,000 troops on its borders.

U.S. Secretary of State Antony Blinken said this week the administration has been in coordination with allies and partners including on “how best to share energy reserves in the event that Russia turns off the spigot, or initiates a conflict that disrupts the flow of gas through Ukraine”.

That was an apparent reference to both the potential of oil and natural gas cutoffs in the aftermath of any invasion by Moscow.

The White House said that on the call, Biden also repeated the commitment of the United States to support Saudi Arabia in defending itself against attacks by Yemen’s Iran-aligned Houthi group, the White House said.

The conflict in Yemen is largely seen as a proxy war between Saudi Arabia and Iran. The Houthis, who ousted the government from the capital, Sanaa, in late 2014, say they are fighting a corrupt system and foreign aggression.

Salman told Biden that Saudi Arabia wanted there to be a “political resolution” in Yemen, SPA said.

Biden’s last call with Salman was reported about a year ago around the time of the release of a U.S. assessment that said Saudi Crown Prince Mohammed bin Salman, the king’s son, approved an operation to capture or kill murdered journalist Jamal Khashoggi in 2018.