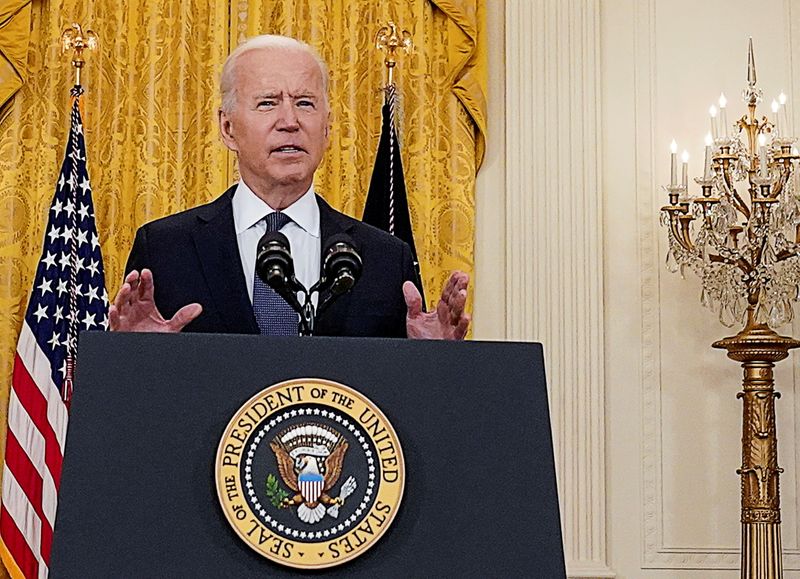 FILE PHOTO: U.S. President Joe Biden delivers remarks on the U.S. economy in the East Room at the White House in Washington, U.S., May 10, 2021. REUTERS/Kevin Lamarque

By Nandita Bose and Susan Heavey

Earlier this month, Reuters reported that both countries were lowering expectations for big breakthroughs at the superpower summit, with neither in a mood to make concessions on their disagreements. https://reut.rs/3yFgQto

“The leaders will discuss the full range of pressing issues, as we seek to restore predictability and stability to the U.S.-Russia relationship,” White House Press Secretary Jen Psaki said.

The Kremlin said in a statement that the two leaders would discuss bilateral ties, problems related to strategic nuclear stability, and other issues including cooperation in the fight against COVID-19 and regional conflicts.

The White House has avoided describing Biden as seeking a “reset” in relations with Putin, a term often used by former U.S. presidents as they seek to improve relations with Russia.

Rather, U.S. officials see the face-to-face meeting as an opportunity to tilt the relationship away from what they see as former President Donald Trump’s fawning overtures to Putin.

Russian officials told Reuters they view the summit as an opportunity to hear from Biden directly after what a source close to the Russian government said were mixed messages from the U.S. administration that took office on Jan. 20.

Putin views U.S. pressure on Navalny and its support for pro-democracy activists in Russia and Belarus as tantamount to interfering in Russian domestic affairs.

Moscow is also unhappy about a raft of U.S. sanctions aimed at Russian entities and individuals – and Biden’s threat of more.

One topic likely to come up is Western outrage at Belarus, which scrambled a fighter and flagged what proved to be a false bomb alert to force a Ryanair plane to land on Sunday in Minsk, where authorities arrested a Belarusian dissident journalist.

Russia has denied reports that four Russian nationals got off the plane in Minsk, which sparked suspicions of Russian involvement.