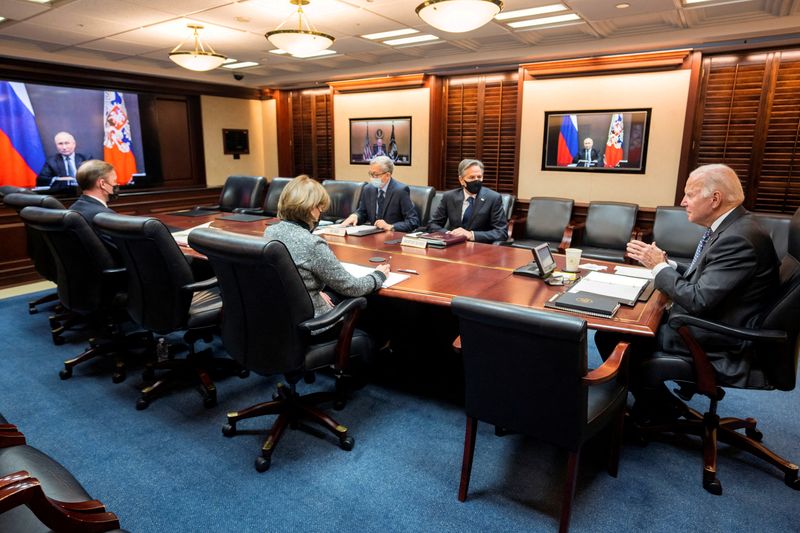 FILE PHOTO: U.S. President Joe Biden holds virtual talks with Russia’s President Vladimir Putin amid Western fears that Moscow plans to attack Ukraine, as Secretary of State Antony Blinken listens with other officials during a secure video call from the Situation Room at the White House in Washington, U.S., December 7, 2021. The White House/Handout via REUTERS

WILMINGTON, Del./MOSCOW (Reuters) -U.S. President Joe Biden and his Russian counterpart Vladimir Putin spoke for nearly an hour on Thursday as rising tensions over Ukraine provided the backdrop for the leaders’ second conversation this month.

Both the White House and the Kremlin are expected to provide their summaries of the call soon.

Moscow has alarmed the West by massing tens of thousands of troops near its border with Ukraine in the past two months, following its seizure of Ukraine’s Crimea peninsula in 2014 and its backing of separatists fighting in eastern Ukraine.

Russia denies planning to attack Ukraine and says it has the right to move its troops on its own soil as it likes.

Biden and Putin had been expected to discuss a range of topics, including not just the tense situation in Europe but also the slow-moving negotiations with Iran https://www.reuters.com/world/middle-east/russian-envoy-iran-says-he-met-with-us-counterpart-vienna-2021-12-29 over its nuclear program.

Moscow, worried by what it says is the West’s re-arming of Ukraine, has said it wants legally-binding guarantees NATO will not expand further eastwards, and that certain offensive weapons will not be deployed to Ukraine or other neighboring countries.

The leader-level talks come ahead of a Jan. 10 U.S.-Russia security meeting, followed by a Russia-NATO session on Jan. 12, and a broader conference including Moscow, Washington and other European countries slated for Jan. 13.

U.S. concerns have not ebbed in recent weeks, according to a senior Biden administration official, despite a report over the weekend that Russia would be pulling back about 10,000 troops from its border with Ukraine. Other officials said they have seen little evidence to support the idea that Russia is pulling back from the border.

“We are at a moment of crisis and have been for some weeks now given the Russian build-up, and it will take a high level of engagement to address this and to find a path of de-escalation,” said one of the U.S. officials, who declined to be named.

The Biden administration has told Russian officials that they will take swift economic action against Russia and reinforce NATO in the case of an invasion.

But the U.S. president has been pushing direct diplomacy, including one-on-ones with Putin, as an alternative.

Putin has compared the current tensions to the Cold War-era Cuban Missile Crisis in 1962. Washington regards some of his demands, including restrictions on NATO expansion, as non-starters.