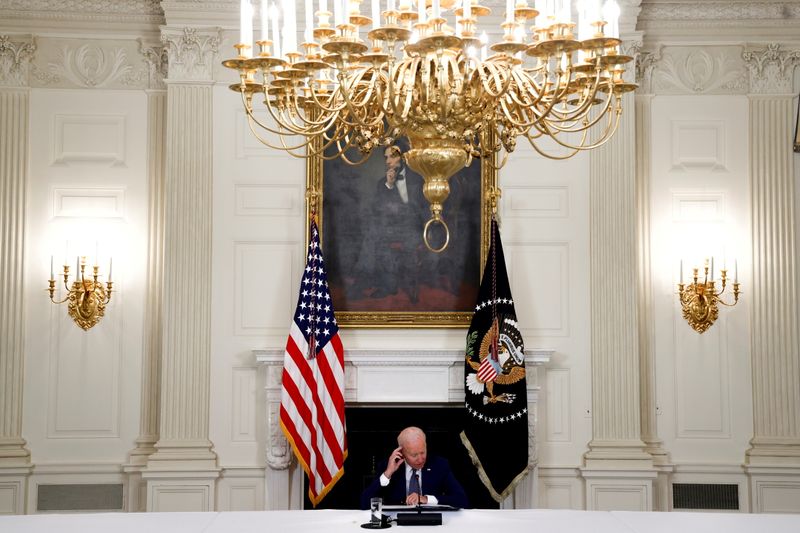 By Simon Lewis and Humeyra Pamuk

WASHINGTON (Reuters) – Hours after the last U.S. troops and diplomats were out of Afghanistan, President Joe Biden said in an address at the White House that Washington will continue to support the Afghans left behind and would defend their basic rights, especially those of women and girls.

“I’ve been clear that human rights will be the center of our foreign policy,” he said, repeating a campaign promise he has made often in speeches since taking office on Jan. 20.

The comment fed growing skepticism among critics, who argued the United States had abandoned those very people to the Taliban – a brutal group with a record of crushing women’s rights in the name of their radical interpretation of Islam.

A review of the Biden administration’s record so far shows concerns over human rights have several times been shunted aside in favor of national security priorities and to ensure continued engagement with foreign powers.

In the Middle East, support for authoritarians such as Egypt’s general-turned-President Abdel Fattah al-Sisi has continued despite the rhetoric on democracy and human rights, advocates say.

In Saudi Arabia, the administration released internal intelligence linking crown price and de facto ruler Mohammed bin Salman to the killing of journalist Jamal Khashoggi, but steered clear of any action against the crown prince himself.

On Myanmar, the administration denounced the military’s coup and issued sanctions against its generals, but left alone a major source of revenue for the junta – offshore natural gas projects involving international firms including U.S.-based oil company Chevron.

And in at least one high-level meeting with Turkish President Tayyip Erdogan, worries over human rights and press freedom were sidelined for other issues, sources familiar with the meeting told Reuters.

While advocates say Biden’s administration has put much more emphasis on promoting human rights than that of his predecessor Donald Trump — who praised authoritarian leaders including Russian President Vladimir Putin and North Korea’s Kim Jong Un — they say that cannot be seen as an accomplishment.

“That’s not the right yardstick,” said Amy Hawthorne, deputy director for research at the Project on Middle East Democracy, an advocacy group.

The real test was how willing Biden was to engage on rights issues himself, Hawthorne said. “That’s what it means to center this issue in your foreign policy. I don’t see any evidence of that.”

Defending the administration’s record, a senior State Department official said diplomats have frequently raised human rights concerns with foreign leaders, including in difficult talks with adversaries including China and Russia.

In some cases, the official told Reuters, raising human rights concerns privately could be a more effective approach and did not constitute the United States “pulling punches.”

“In some contexts, it’s not helpful to publicly bash governments doing the wrong thing there but to raise things privately,” said the official, who requested anonymity to speak about U.S. policy.

Sometimes the issue can be too thorny to be raised even in private. Sources said that in a high-level meeting in June with Erdogan, Biden did not discuss worries over Turkey’s human rights record and instead focused on issues including the future of the Kabul airport, a priority as U.S.-led troops withdrew from Afghanistan.

The two NATO allies are already at odds over issues including Ankara’s purchase of Russian air defense weapons, and U.S. officials said any debate of Turkey’s treatment of dissidents and press might have added strain.

Turkish officials took it as a signal Washington would not push hard over human rights, the sources said, despite repeated public criticism from the Biden administration of Ankara’s treatment of opposition groups and its official recognition that the 1915 killings of Armenians by the Ottoman Empire was genocide.

Rights advocates and some U.S. officials were dismayed at the missed opportunity to take a stance.

“With undemocratic rulers, nothing is more powerful than hearing it from the president himself,” said Annie Boyajian, director of advocacy at Freedom House.

The first test of Biden’s commitment to democracy overseas came within days of him taking office, when Myanmar’s military seized power and locked up elected politicians.

Biden responded with sanctions against junta members but fell short of targeting offshore gas projects that account for roughly half of Myanmar’s foreign currency revenue.

The administration was still weighing whether to impose sanctions on the gas projects, the senior U.S. official said, but added that much of Myanmar’s population, as well as neighboring Thailand, relied on the gas.

An upcoming test is whether Secretary of State Antony Blinken continues his predecessors’ policy of overriding a congressional check on military aid to Egypt, granting an exception to free up about $300 million for Sisi’s government on that argument that it would be in the U.S. national security interest. A decision is expected by end-September.

More than a dozen rights group told Blinken in a letter in April that if he refused to release the funds “the United States will send a clear message that it is serious about its commitment to supporting human rights abroad”.

Sisi, who ousted the Muslim Brotherhood in 2013, has overseen a crackdown on dissent that has tightened in recent years. He denies there are political prisoners in Egypt and says stability and security are paramount.

“We have publicly, as well as privately, indicated our concerns about the many, many human rights abuses in Egypt and we’ll continue to do so,” the official said.