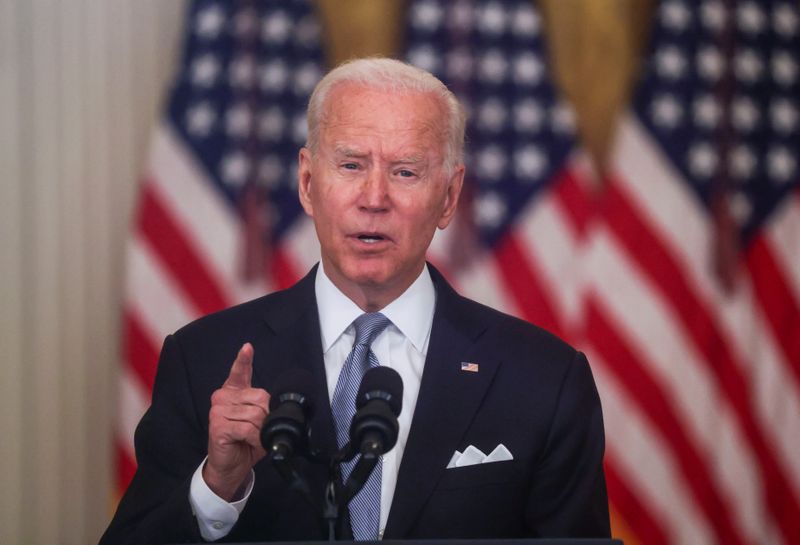 U.S. President Joe Biden delivers remarks on the crisis in Afghanistan during a speech in the East Room at the White House in Washington, U.S., August 16, 2021. REUTERS/Leah Millis

By Steve Holland and Nandita Bose

WASHINGTON (Reuters) -President Joe Biden on Monday said he “stood squarely behind” his decision to withdraw U.S. troops from Afghanistan and rejected broad criticism of the chaotic withdrawal that is posing a crisis for him.

Biden blamed the Taliban’s takeover of Afghanistan on Afghan political leaders who fled the country and the unwillingness of the Afghan army to fight the militant group. He has also blamed his predecessor, former President Donald Trump, for empowering the Taliban and leaving them “in the strongest position militarily since 2001.”

The decision to withdraw sparked criticism from allies and adversaries after the Afghan government collapsed within days and the United States scrambled to evacuate American civilians and embassy employees from Kabul.

“I stand squarely behind my decision,” Biden said in a speech at the White House. “After 20 years I’ve learned the hard way that there was never a good time to withdraw U.S. forces. That’s why we’re still there.”

“The truth is: this did unfold more quickly than we anticipated. So what’s happened? Afghanistan political leaders gave up and fled the country. The Afghan military gave up, sometimes without trying to fight,” Biden said.

The Democrat has faced a barrage of criticism, from even his own diplomats, https://www.reuters.com/world/us/we-could-have-done-more-frustration-grows-washington-over-bidens-kabul-2021-08-16 over his handling of the U.S. exit, pulling out troops and then sending back thousands to help with the evacuation.

The political risks facing Biden from this decision, however, remain to be seen. Many Americans have expressed support for Trump and Biden’s decision to leave Afghanistan, America’s longest war. https://www.reuters.com/world/asia-pacific/americas-longest-war-20-years-missteps-afghanistan-2021-08-16

The United States and allies invaded following the Sept. 11, 2001, attacks on New York and Washington and toppled the Taliban who had hosted al Qaeda militants responsible for the attacks.

Five people were reported killed in the chaos. A U.S. official told Reuters two gunmen had been killed by U.S. forces there over the past 24 hours.

Biden also said his decision is a result of the commitment he made to American troops that he wasn’t going to ask them to continue to risk their lives for a war that should have ended long ago.

“Our leaders did that in Vietnam when I got here as (a) young man. I will not do it in Afghanistan,” he said. “I know my decision will be criticized but I would rather take all that criticism than pass this decision on to another president.”

(Reporting by Steve Holland and Nandita Bose in Washington, Additional reporting by Jan Wolfe and Jarrett Renshaw in WashingtonEditing by Sonya Hepinstall and Grant McCool)