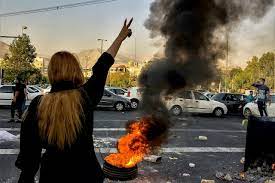 This time, the voices may be louder and the anger may run deeper. Iran’s protests may be more popular and the demands greater than any time since the country’s 1979 Islamic revolution.

Yet after four months, the cries of “women, life, freedom,” which echo through streets and cemeteries, campuses and workplaces have not brought the liberty demanded. No loosening of strict Islamic edicts, and certainly not the complete regime change many want as they chant: “This is the year of the bloody uprising, Supreme Leader [Ali] Khamenei will be overthrown.”

The unrest was sparked by the death of 22-year-old Mahsa Amini after she was arrested by Iran’s morality police in September for not wearing her headscarf properly.

But the mullahs — led by Khamenei — have not won either.

Their religious doctrine holds less appeal for the broad collection of Iranians who have taken to the streets. Only a brutal crackdown on demonstrators fends off the threat to their power — including what UN Human Rights High Commissioner Volker Turk called Iran’s “weaponization” of executions to eliminate dissent.

So far, four men are known to have been hanged for their roles in demonstrations where the government says security forces were attacked and killed. More than 100 additional protesters have been sentenced to death, says the Iranian human rights organization HRANA.

Among the latest to be executed, on Jan. 7, was 39-year-old Sayed Mohammad Husseini, whose Tehran lawyer tweeted his “confessions were tortured” out of him.

HRANA says 525 civilians have been killed.

That has had a “chilling effect” on protests, says Hoda Katebi, a U.S.-based Iranian activist and writer.

Censorship of media and the internet makes it hard to know for sure, but demonstrations seem now to be smaller and less frequent. Gatherings now often happen at protesters’ funerals or during mourning visitations traditionally held 40 days later. Large protests in city centres, common last fall, are almost unseen.

The most common act of defiance is by women who walk the streets with their heads uncovered, nervous that security forces will pounce.

“I just feel like they can attack me any time,” one young woman told a Norwegian reporter in Tehran. “I do it because I want to be free.”

The situation is “very grim and terrifying,” said Katebi, but “that doesn’t mean people’s hopes are crushed or that the revolution is over.” She predicts “more waves [of protests] until victory.”

All this has brought Iran to a stalemate.

“It is a battle of wills,” said Ali Vaez, the Iranian-born director of the Iran project at the International Crisis Group. “Neither side is able to dislodge the other.”

With inflation around 40 per cent, natural gas and electricity shortages widespread and ongoing sanctions from the West, the regime has few ways to appease protesters economically — and no desire to do so politically, Vaez said.

The government is “simply not able to address its existing problems with the same cast of characters who created this disaster to begin with,” he said. 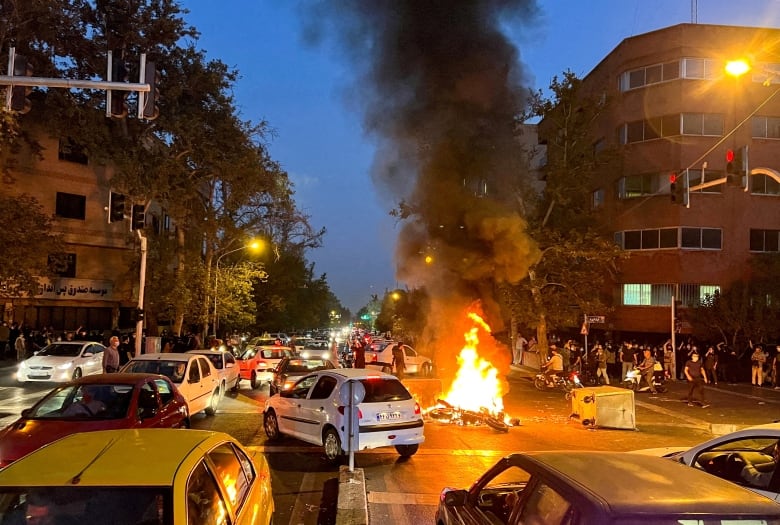 A police motorcycle burns during a protest in Tehran on Sept. 19, 2022.

The protesters, on the other hand, are “much more unified than at any point in the past 43 years,” in their quest for an “overthrow of the Islamic republic.”

Experts say it would take a big, game-changing event to achieve that. And there are two they can think of, starting with a leadership change in Iran.

Khamenei is 84 years old, with plenty of speculation about how much longer he will live. In September, he was reported to be “gravely ill” with a bowel obstruction. Eight years earlier, Western intelligence officials were quoted saying he has advanced cancer.

In more than three decades as supreme leader, he has repeatedly taken a tough line against any political threat. Khamenei has sent security forces to put down other large waves of protest since 2009, and purged opponents from Iran’s institutions, leaving him unchallenged.

There is no sign of major cracks in that leadership, nor any expectation that a successor would change course. After all, most of the 88 clerics who will elect the next leader — Iran’s Assembly of Experts — are hardliners says Saeid Golkar, an expert on Iran’s leadership at the University of Tennessee.

But Golkar does foresee a year or two of instability before a new ayatollah consolidates power, a period that has “the potential for changing the situation very rapidly and unpredictably.”

“People will be ready for protests and revolt,” while the Revolutionary Guard and other security forces who have remained loyal to Khamenei may not be immediately committed to his successor, he said.

Another unpredictable event could be a military attack from the outside, though both Golkar and Vaez consider that less likely.

As Iran has developed its own nuclear weapons program, it has triggered rounds of sanctions from Western powers and threats of military force as a last resort from U.S. President Joe Biden. Israel has already been accused of being behind repeated mysterious attacks on Iranian nuclear facilities and of ordering the assassination of the country’s top nuclear scientist in 2020.

Tehran’s military help to Moscow during the current war in Ukraine — including supplying Russia with Iranian-made drones — has also angered the West.

If any of these did prompt an outside attack on Iran, Vaez says the regime could try to use it to “rally the public around the flag and change the subject domestically.” The military might even try to “push the clerics aside and take over,” he said.

Or, the regime could find no support at home, says Golkar. “People are so desperate, so angry and hopeless, they might even welcome an attack on Iran.”

Tehran has been watching foreign reaction to the protests, and condemning the growing list of sanctions by the EU, the U.K., U.S. and Canada against institutions and top officials.

And, says Golkar, it has been reacting.

He says Iran’s execution of British-Iranian Alireza Akbari, announced last weekend, seems timed to send a message to the West: “If you are going to sanction us, we have some leverage too and we’ll pressure you.”

Akbari was a former deputy defence minister in Iran, accused by the government of being a spy for British intelligence, MI-6. London denied the accusation.

Other foreign nationals are also being pressured by Iran, including a Belgian NGO worker sentenced to 40 years in jail on espionage charges by a Tehran court last week, a German arrested for taking pictures of “sensitive” oil installations and American-Iranian Siamak Namazi who recently started a hunger strike after spending seven years in an Iranian jail, also accused of spying.

“Iran’s use of wrongful detention as political leverage is outrageous,” Whitehouse spokeswoman Karine Jean-Pierre told reporters, after Namazi was allowed to send a letter to Biden this week, pleading his case.

Still, few are surprised that Tehran is using whatever tools it can to strike back against one of the most serious political challenges the regime has faced.

To the outside world they try to play the role of “mad man,” said Golkar, to appear unpredictable, when in fact they are “afraid.”