Share
Tweet
Share
Share
Email
Comments
“Of course, I’ve given thought to if — that that may be raised as a legal issue,” Fulton County District Attorney Fani Willis said in an interview with CNN when asked about the argument his lawyers have previously made.
“I don’t think that that protection will prevent a prosecution if that becomes necessary in this state case,” she added.
Willis has been investigating whether Trump or his allies committed any crimes in their campaign to convince Georgia officials to find fraud and hand Trump a victory in the Peach State in 2020. The probe was launched last year following Trump’s call with Georgia Secretary of State Brad Raffensperger in which he pushed the Republican to “find” votes to overturn the election results.
Willis told CNN on Monday that she’s not worried that the former President will try to delay her investigation, saying she plans “to use the power of the law” as grand jury proceedings in the case begin this spring. 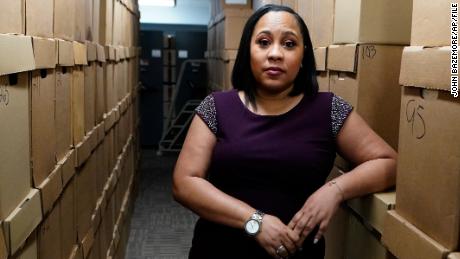 “This is a criminal investigation. We’re not here playing a game,” Willis said. “I plan to use the power of the law. We are all citizens.”
“Mr. Trump, just as every other American citizen, is entitled to dignity. He’s entitled to be treated fairly. He will be treated fairly in this jurisdiction,” she added. “But I plan to do my job and my job is to make sure that we get the evidence that gives us the truth. I’m not concerned at all about games to delay this.”
Trump, whose litigious personality has long defined his political and business careers, has been known to retain legal teams that work hard to slow down cases against him, mucking up legal proceedings in hopes that they’ll eventually burn out.
The comments from Willis come as her case against Trump picks up speed, with Fulton County Superior Court judges approving last month her request to seat a special grand jury to investigate Trump’s actions in office. The special grand jury, which will be seated starting May 2, does not have the authority to issue an indictment, but it will allow Willis to seat a panel entirely focused on gathering evidence in the Trump investigation.
She said she needed such a grand jury to issue subpoenas to compel witnesses to testify and to gather additional evidence — a step toward pursuing possible criminal charges.
Willis also said last month that her office has “received information indicating a reasonable probability that the State of Georgia’s administration of elections in 2020, including the State’s election of President of the United States, was subject to possible criminal disruptions,” according to a letter sent to Christopher Brasher, chief judge of Fulton County’s Superior Court, and provided by the court.