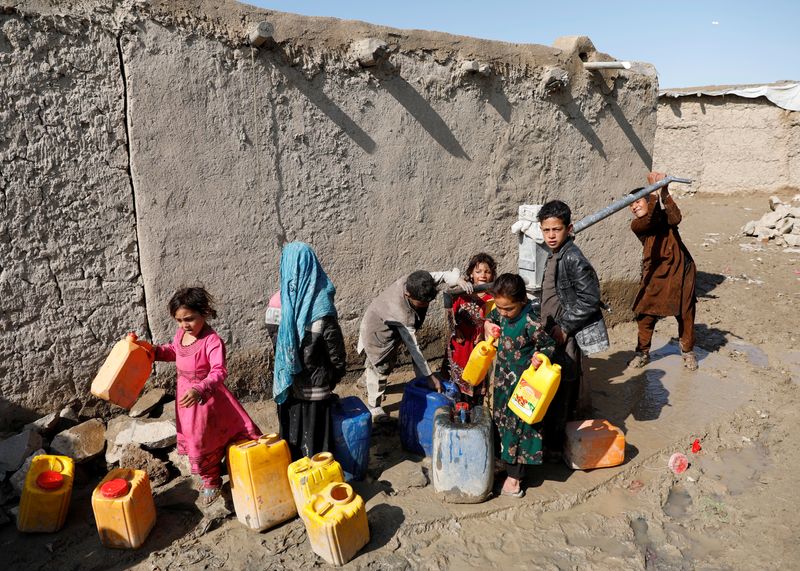 FILE PHOTO: Internally displaced Afghans collect water from a public water pump next to their tents at a refugee camp, during the spread of coronavirus disease (COVID-19), in Kabul, Afghanistan March 28, 2020.REUTERS/Mohammad Ismail

By Francesco Guarascio and Robin Emmott

BRUSSELS (Reuters) – The European Union is weighing a new package of financial aid to Afghanistan and its neighbours to help limit the flow of refugees from the country, ravaged by intense fighting between government forces and the Taliban, two officials said.

The ongoing withdrawal of international troops from Afghanistan after almost two decades has galvanized the Taliban, who could retake control of large parts of the country, spurring a new flow of refugees.

The EU plan, which is at a preparatory phase, would involve more financial help to Afghanistan, Pakistan and countries in the region, two EU officials and one diplomat familiar with the talks told Reuters, with money also being given to Iran.

The objective would be to help refugees closer to home and avoid a new flow of asylum seekers to the EU, the official said.

The European Commission declined to comment. In 2021, the EU is set to spend some 57 million euros ($67 million) in humanitarian support for Afghanistan. The financial support for the coming years will not be ready before the autumn and needs approval from EU governments and lawmakers.

“Money could go to Afghanistan but also to Pakistan and possibly even Iran,” the diplomat said, saying that the funding to Kabul would depend on the Taliban’s advance. It would be more difficult to disburse them if the Taliban were in power.

The EU’s top diplomat, Josep Borrell, met Afghan President Ashraf Ghani and Pakistani Prime Minister Imran Khan last week in Tashkent. In a blog post on Wednesday, Borrell offered Afghanistan and the region support but said: “Future support to Afghanistan … will remain conditional on the preservation of the democratic progress.”

Turkey, which is set to receive new EU funds to house refugees and migrants, could play a role in housing more Afghans, but any new funding for Afghanistan would be separate from the planned 3.5 billion euros for Turkey until 2024.

After a peak in 2015 when more than one million migrants came to the EU, mostly from Syria, Afghanistan and Iraq, the EU has cut the number of arrivals thanks to a deal with Turkey which receives EU funds to host asylum seekers in its territory.

More than 6.5 million Afghans already live in Iran and Pakistan. Money to Iran would underscore how important the EU sees stemming migration flows. After former U.S. President Donald Trump pulled out of the Iran nuclear deal with world powers in 2018, EU plans for economic assistance have been hindered by renewed U.S. sanctions on Tehran.

Fresh EU funds would not be exclusively for migration but would constitute a major portion of the aid, the official said.