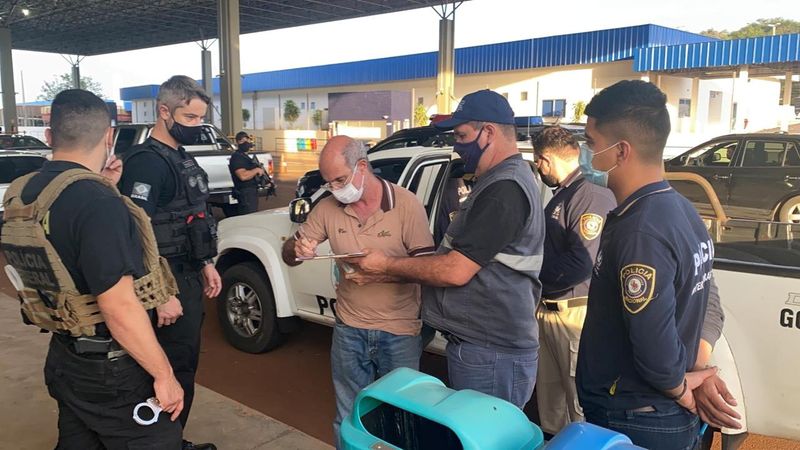 Brazilian citizen Chelbe Willams Moraes writes on a document as he is expulsed from Paraguay, in an unknown location, June 7, 2021. Courtesy of Direccion General De Migraciones Paraguay/Handout via REUTERS/Files

BELO HORIZONTE, Brazil (Reuters) – Record numbers of Brazilians have been arrested at the U.S. southern border this year, part of the United States’ broader migration crisis. Police believe a child-custody dispute has led them to one of the smugglers moving migrants north.

In early June, Brazilian federal police arrested Chelbe Moraes, a businessman who had allegedly absconded with his three-year-old daughter when he lost custody to his ex-partner. After tapping the phones of Moraes’ associates, the officers began to suspect he was a veteran people smuggler, or “coyote.”

In a June 25 police report sent to a federal judge and seen by Reuters, they asked that criminal charges of child trafficking, human smuggling and criminal conspiracy be filed against Moraes.

Police accuse him of charging Brazilians who lack valid U.S. visas around $20,000 each to enter the United States via Mexico. To pull it off, Moraes has constructed an international network that includes corrupt cops and officials as well as U.S-based family members, the court filing says.

Reuters spoke to more than 20 people with knowledge of the case, including police, immigration officials, associates of Moraes and three people who claimed to be his clients. Those interviews paint a picture of a seasoned people smuggler whose business has thrived amid political and economic turmoil in Brazil.

Moraes, who has declared his innocence to the police, told Reuters he runs a legitimate consultancy advising people on U.S. asylum claims from his home state of Minas Gerais. He said he has served up to 200 customers over a 20-year career, charging clients who meet U.S. criteria up to 100,000 reais ($18,086) to help them migrate.

“My advice is expensive as hell, because I know American laws,” Moraes said.

During the first 11 months of the 2021 fiscal year, 46,280 Brazilians were apprehended at the southern U.S. border, U.S. Customs and Border Protection (CBP) data show, compared with 17,893 in the whole of 2019. While that’s just a fraction of the more than 550,000 Mexicans who’ve been nabbed so far this year, Brazilians now rank No. 6 among the nationalities detained in 2021.

“We’ve had flows with Brazilians in the past that I’ve seen, but not to this extent,” said Ramon Romo, chief of the Human Smuggling Unit at Homeland Security Investigations, the investigative unit of U.S. Immigration and Customs Enforcement.

Brazilian federal prosecutors on July 7 charged Moraes, 60, with child trafficking for fleeing to neighboring Paraguay with his daughter. Moraes pleaded not guilty, saying it was a planned work trip. Now back in Brazil, Moraes remains free pending trial. No charges have been filed in connection to his suspected smuggling operation; prosecutors granted police more time to investigate Moraes’ seized cellphone, computer hard drive and other documents.

Two people familiar with his alleged racket – a former customer and an ex-associate – told Reuters that Moraes coaches his clients to pose as tourists upon arrival in Mexico, sometimes gaining them entry with the help of bribed Mexican immigration officials.

Moraes then whisks the Brazilians north, where they either jump the border with the help of hired Mexican coyotes, or seek U.S. asylum using fake documents and elaborate cover stories Moraes has devised for them, the sources said.

Mexico’s National Migration Institute, the country’s federal immigration agency, did not respond to a request for comment.

People who can prove they face persecution at home due to their race, religion, nationality, social group or political opinions may be eligible for U.S. asylum. Backlogs in U.S. immigration courts mean that those who enter often can remain in the United States for years while their cases are processed.

Moraes said those who claim he ran a smuggling operation were “induced” to do so by police or were envious of his success.

But he acknowledged benefiting from Brazil’s woes.

“The worse the government here gets, the better for me,” he said.

Brazilian migration to the United States has surged since 2018, when right-wing President Jair Bolsonaro was elected. Just over 1,500 Brazilians were detained at the U.S. southern border in 2018, a number that jumped 1,100% the following fiscal year.

Brazil has struggled with multiple crises on Bolsonaro’s watch. More than 600,000 Brazilians have died from COVID-19, the world’s second-highest death toll after the United States. Unemployment is around 14%, while annual inflation has hit double digits. Poverty has soared.

“The average Brazilian is disillusioned with everything,” said Daniel Fantini, the lead detective investigating Moraes.

Bolsonaro’s office did not respond to requests for comment.

To enter the United States, Brazilians must obtain a visitor visa. That process has gotten stricter due to COVID-19 and the growing number of travelers overstaying their visas, three U.S. officials told Reuters.

Many Brazilians are now turning to coyotes, according to migrants, their family members, police and officials who spoke with Reuters.

Lenilda dos Santos, a nurse from northern Brazil, died of thirst in September after crossing into New Mexico. Her brother, Leci Pereira, told Reuters she had agreed to pay $25,000 to a smuggler, pledging her house as security. The alleged smuggler, who only provides his clients with the nickname “Piskuila,” did not respond to requests for comment.

In California, CBP agents are accustomed to speaking Spanish, the language of Mexico and most of Latin America. But they are struggling to handle what the agency calls an “unprecedented” jump in Portuguese-speaking Brazilians being stopped at the border.

Diplomatic efforts are underway to slow the flow.

Brazilians don’t need visas to enter Mexico, making it easy for smugglers to fly migrants there and transport them north. The Biden administration wants Mexico to impose visa requirements on Brazilians to complicate that path, two sources familiar with the situation told Reuters.

The talks began in July, but Mexico has been resistant, citing lucrative Brazilian tourism and possible reciprocal action by Bolsonaro, one of the people said.

The foreign ministries of Mexico and Brazil didn’t respond to requests for comment.

After Moraes fled Brazil with his daughter, federal police interrogated his alleged associates.

Geisiane Batista, whom authorities claim handled the finances of the smuggling operation, helped Moraes run a lingerie factory in Minas Gerais, according to her deposition in the police report seen by Reuters. She told police that would-be migrants, none with U.S. visas, frequently visited the factory to meet Moraes and arrange passage.

Jose Martins worked as Moraes’ driver, taking migrants to Rio de Janeiro and São Paulo to catch flights to Mexico, he told police in his deposition. He said Moraes charged 100,000 reais to “put someone in the United States,” and offered him a commission of 1,000 reais ($181) for each new client he brought in.

Among those Martins said he transported were Ismael da Silva and his wife. An unemployed security guard, da Silva said in his deposition that he sold his car, furniture and tools to help finance their $17,000 journey.

The couple never made it. Mexican officials denied them entry after they landed in Cancun in May, da Silva told police. Contacted by Reuters, da Silva declined to comment.

Others were luckier. Martins, the driver, told police the da Silvas were part of a group of 12 Brazilian migrants on that trip, six of whom entered the United States. Martins declined to comment.

Wiretap evidence suggests Moraes relies on some U.S.-based relatives, including an adult daughter, Janaina Moraes, to help move migrants, according to the police report. Brazilian police have not accused her of wrongdoing.

Janaina Moraes, who lives near Boston, told Reuters she occasionally used her phone to manage hotel check-ins for her father’s clients, or to buy them food, but denied working for him.

A U.S. Department of Homeland Security spokesperson declined to comment on what she said was an active investigation.

Brazilian migrant Bruno Lube, now 41, told Reuters he hired Moraes in 2016, but was caught by U.S. agents after scaling the border wall near El Paso with a Mexican coyote. He said he spent nearly five months in U.S. detention before being deported back to Brazil, where he denounced Moraes to the federal police.

A federal police spokesperson confirmed Lube’s 2017 complaint against Moraes, saying it was under investigation.

Moraes has had better success in helping families gain entry, according to Brazilian police and a source with knowledge of his operation.

Central Americans and Mexicans with children often are expelled to Mexico upon arriving at the U.S border as part of a U.S. policy initiated during the pandemic. In contrast, almost all Brazilians traveling with minors who arrive at the southern border seeking asylum are admitted to await their hearings on American soil.

Through August of this fiscal year, 99.2% of Brazilian family units have been allowed entry, CBP data show, compared with about 15% of Mexican families, 57% of those from Guatemala and 66% of Honduran family units. When the expulsion policy began, Mexico said it would only accept expelled Mexicans and Central Americans from the United States, but it has since taken some other nationalities.

To game the system, the source said, Moraes created fake “families” out of unrelated adults and minors, providing them with phony paperwork as well as fictitious backstories of domestic violence or gang threats to bolster their asylum claims.