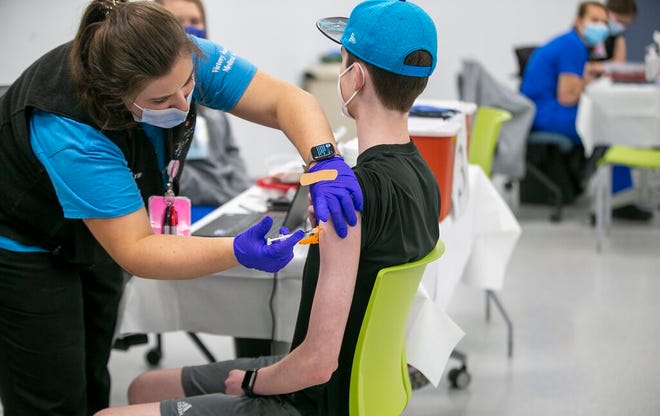 Tim Thornell has spent the past 18 months watching COVID-19 stalk his home state of Wyoming, killing more than 1,000 of his neighbors

“We are watching our friends and family and neighbors die in front of our eyes,” said Thornell, CEO of Cheyenne Regional Health System, the state’s largest.

But Thornell, 51, has been reluctant to order his staff to get vaccinated, even though COVID-19 hospitalizations are as high as they’ve ever been. Instead, he’s offering $600 bonuses or time off to tempt the approximately 20% of his staff who have so far declined to get a shot.

“We want to make that decision for ourselves,” he said of vaccine mandates.

Across the nation, employers, government officials, health care workers and other Americans are continuing to push back against COVID-19 vaccine mandates, even as the death toll has climbed to more than 740,000 people. With the Biden administration preparing to enforce nationwide vaccine mandates, they are marching in the street in protest, resigning in mass and demonstrating outside government buildings.

In Wyoming, legislators have called a special legislative session to find ways to block or otherwise weaken the Biden administration’s vaccine rules. Conservative legislators in Iowa, Florida and Tennessee are also planning or holding special sessions to fight mandates, and Texas finished one earlier this month, where lawmakers ultimately decided against passing new legislation in the face of strong business opposition. West Virginia, which has the lowest vaccination rate, has also launched a special session in part to discuss a proposal curtailing the powers of local health departments.

And Florida Gov. Ron DeSantis sued the Biden administration Thursday over the mandates.

Protests have ranged from marches in New York City and Chicago to mass resignations of health care workers. Last week, a small group of people supporting Brooklyn Nets player Kyrie Irving — who has refused to get vaccinated despite a mandate from New York City lawmakers — gathered outside Barclays Center and tried to push their way into the arena. And New York City firefighters protested outside Mayor Bill de Blasio’s house Thursday.

Experts said there may be little opponents of vaccine mandate can do: The Supreme Court has already upheld several state and employer vaccination mandates.

Biden’s vaccine mandates are not blanket orders for all Americans, but they cover tens of millions of people, from the 80 million workers at companies with 100 or more workers, to the estimated 17 million employees at hospitals like Cheyenne Regional and nursing homes and other health care facilities receiving federal Medicare or Medicaid payments.

Some of the mandates permit testing in lieu of vaccination, but many businesses say frequent testing will be so cumbersome as to be effectively unworkable. Biden announced the mandates about six weeks ago, but they have not yet taken effect because federal regulators are still writing the specific rules.

At the local level, some Democratic governors and mayors have issued their own vaccine mandates for specific populations, including in California, New York and Colorado.

“We value personal responsibility much higher than we do government edict,” Gordon said. “And we agree that Wyoming cannot let these federal transgressions stand.”

Many of the anti-vaccine mandates proposals floated in Wyoming, Tennessee, Iowa and Florida would also ban private businesses from mandating vaccines for their workers, ban mandates of any vaccine without full FDA approval or force employers to compensate workers if they got sick from any side effects. Only the Pfizer vaccine currently has full FDA approval; the others are being given under an emergency use authorization.

These proposals in many cases put conservative leaders squarely at odds with the business community, which argues employers should have the right to operate as they see fit. Those businesses oppose both Biden’s mandates and GOP-backed ones intended to counter them, because having two sets of competing mandates would force businesses to choose which government to ignore.

In Texas, business leaders persuaded the Legislature to end its special legislative session without taking any action on vaccine mandates. Glenn Hamer, president of the Texas Association of Business, said business owners want to do the right thing, and getting people vaccinated voluntarily should be the top priority. He said adding new state mandates to countermand federal mandates would make matters worse.

“What I don’t believe employers want to be is the vaccine police,” he said. “They want their workers to be safe, they want their families to be safe. There’s genuine concern. And I worry what happens if it becomes absolutely impossible for many employers to comply with all the mandates: federal, state and locality.”

Hamer, 52, said he worries that vaccine mandates will reduce the available workforce, especially in critical areas like trucking or defense.

“The goal should be to get people protected,” Hamer said. “It’s not to just check a box.”

Adam Galinsky, 52, a social psychologist and expert in leadership and ethics at Columbia University in New York, said he’s spoken with dozens of top corporate leaders since Biden announced the vaccine mandate. He said many quietly support the mandate because it absolves them of the responsibility of making the decision. Galinsky compared it to the civil rights era, when some restaurant owners privately supported anti-segregation laws but were nervous to say so, and thus welcomed the federal government’s action.

Mandates increase vaccination rates. But at what cost?

Public health experts said some of the states protesting vaccine mandates are exactly where vaccine mandates would be effective, because residents have refused to voluntarily participate, prolonging the pandemic. They said mandates demonstrably increase vaccination rates in the same way seat belt laws increase the use of seatbelts, saving lives.

Today, Wyoming’s vaccination rate stands at 44%, third-last in the country and well below the national average of 58%. Several Wyoming counties have adult vaccination rates of just 30%. Wyoming also has one of the lowest numbers of ICU beds nationally, at 1.8 per 10,000 residents.

And, she points out, opposition to seatbelt laws has generally faded away. Cohen is a Harvard Law School professor and a faculty fellow at the National Bureau of Economic Research.

“Our study identified the significant gains in lives saved that were produced by mandatory seat belt laws,” Cohen added. “Mandatory vaccination requirements, I expect, would also contribute substantially to the saving of lives both directly and indirectly.”

Michelle Mello, a medicine and law professor at Stanford University in California, said there are two parallel groups of mandate opponents: people who are invoking personal or religious freedom to skip vaccinations, and right-wing politicians speaking to voters primed by 18 months of politicization about the virus in general.

Mello, 48, said it’s unclear whether politicians truly oppose vaccine mandates or if they’re simply riding a wave of populism, even though polls show the American public generally supports COVID-19 vaccine mandates. For decades, almost every schoolkid in the country has faced mandatory vaccinations for everything from polio to tetanus and diphtheria.

“Maybe a clue is that none of them ever had a problem with any other vaccine mandate ever,” Mello said.

Mello said she’s watching to see how the Biden administration and the Supreme Court handle the growing number of people seeking religious exemptions despite never previously objecting to vaccinations. Several Republican attorneys general plan to sue the Biden administration on religious- and personal-freedom grounds once the mandates are formally introduced, and 21 of them on Wednesday sent Biden a letter raising objections.

The United States has a long history of permitting people with deeply held religious beliefs to skip vaccines, but the U.S. Equal Employment Opportunity Commission this week specified that “objections to COVID-19 vaccination that are based on social, political, or personal preferences” don’t qualify for an exemption.

Mello said it’s language like that, and questions about whether Catholics can claim an exemption even though the pope recommends vaccinations, that will put the Biden mandates before the Supreme Court.

“I think the most likely outcome is we will continue to see people die in states with legislatures and governors behaving irrationally about what works and doesn’t work in controlling COVID,” she said.

Back in Cheyenne, Thornell, the health care administrator, said he’ll likely have to implement a vaccine mandate within the health system unless Biden’s orders take effect relatively soon. Every day, he said, the vaccinated staff at the health system is growing more frustrated at the small proportion of colleagues who have refused, and some are threatening to quit to work in neighboring Colorado, which has a vaccine mandate for health care workers.

Thornell, a board member of the Greater Cheyenne Chamber of Commerce, opposes the federal mandate. But he also opposes the efforts by Wyoming legislators to control how he operates his hospital. Several proposals floated by lawmakers would prohibit Thornell from mandating vaccines for his staff or treating unvaccinated workers any differently than those who’ve had the jab.