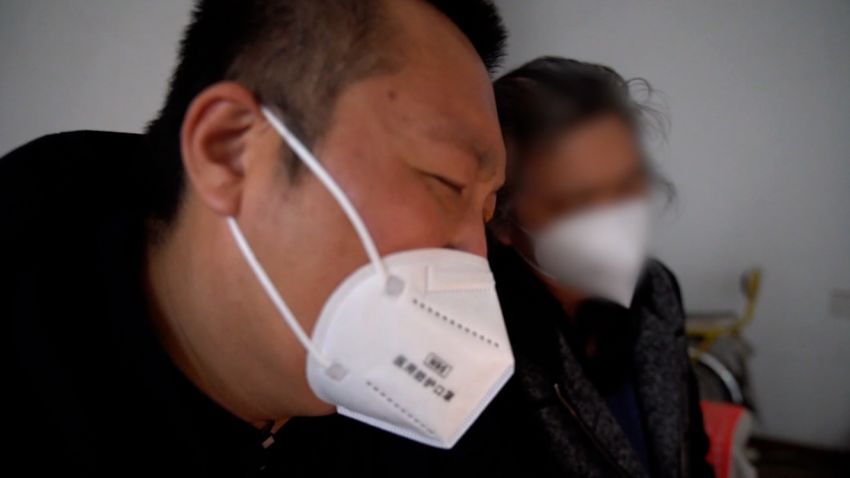 Share
Tweet
Share
Share
Email
Comments
Beijing — Zhou, an auto dealer in northeastern China, last saw his father alive in a video chat on the afternoon of November 1, hours after their home on the far outskirts of Beijing was locked down.

At the time, they didn’t even realize the snap Covid restrictions had been imposed – there was no warning beforehand, and the apartment building where Zhou’s parents and his 10-year-old son lived did not have any cases, he said.

The family found out the hard way, when Zhou’s father was denied immediate emergency medical help after he suddenly began struggling to breathe during the video call. Zhou and his son made a dozen calls for an ambulance, he said, claiming security guards blocked relatives from entering the building to take the 58-year-old grandfather to a hospital.

An hour later, an ambulance finally arrived to drive Zhou’s father to a hospital just five minutes away. But it was too late to save him.

“The local government killed my dad,” Zhou told CNN in his Beijing home, breaking down in tears. He said he’s received no explanation about why the ambulance took so long to arrive, just a death certificate stating the wrong date of death.

Zhou’s anger is part of a growing torrent of dissent toward China’s unrelenting zero-Covid lockdowns, which officials insist are necessary to protect people’s lives against a virus that, according to the official count, has killed just six people from tens of thousands of symptomatic cases reported in the last six months.

But increasingly, the restrictions – not the virus – are being blamed for heartbreaking deaths that have sparked nationwide outrage on social media.

On the same day Zhou lost his father, a 3-year-old boy died of gas poisoning in a locked-down compound in the northwestern city of Lanzhou, after he was blocked from being taken promptly to a hospital. Two weeks later, a 4-month-old girl died in hotel quarantine in the central city of Zhengzhou after a 12-hour delay in medical care.

Many more families, like Zhou’s, have likely suffered similar tragedies outside the social media spotlight.

Zhou said he contacted several state media outlets in Beijing to report on his story, but no reporters came. Amid growing desperation and anger, he turned to foreign media – despite knowing the risk of repercussions from the government. CNN is only using his surname to mitigate that risk.

“I just want to get justice for my dad. Why did you lock us down? Why did you take my dad’s life away?” he said.

Workers erect metal barriers outside a community under lockdown in Beijing on November 24.

Across China, anger and frustration with zero-Covid has reached new heights and led to rare scenes of protest, as local authorities rushed to reintroduce restrictions amid record infections – despite a recent government announcement of a limited easing of some rules.

Last week, in the southern city of Guangzhou, some residents revolted against an extended lockdown by tearing down barriers and marching down streets.

In the central city of Zhengzhou this week, workers at the world’s biggest iPhone assembly factory clashed with hazmat-suited security officers over a delay in bonus payment and chaotic Covid rules.

And on Thursday, in the sprawling metropolis of Chongqing in the southwest, a resident delivered a searing speech criticizing the Covid lockdown on his residential compound. “Without freedom, I would rather die!” he shouted to a cheering crowd, who hailed him a “hero” and wrestled him from the grip of several police officers who had attempted to take him away.

These acts of defiance echoed an outpouring of discontent online, notably from Chinese football fans – many under some form of lockdown or restrictions – who have only been able to watch from home as tens of thousands of raucous fans pack stadiums at the World Cup in Qatar.

“None of the fans are seen wearing face masks, or told to submit proof of Covid test results. Are they not living on the same planet as us?” asked a Wechat article questioning China’s insistence on zero-Covid, which went viral before it was censored.

There are signs that Chinese officials are feeling the heat of the growing public discontent, which came on top of the heavy social and economic tolls inflicted by the widening lockdowns.

Earlier this month, the Chinese government released a 20-point guideline to limit the disruption of zero-Covid rules on daily life and the economy. It shortened quarantine from 10 to eight days for close contacts of infected people and for inbound travelers. It also scrapped quarantine requirements for secondary contacts, discouraged unnecessary mass testing drives and removed a major restriction on international flights.

The announcement had raised hopes of a pivot toward reopening, triggering a rally of Chinese stocks. But a surge in infections as China heads into its fourth winter of the pandemic is quickly dampening such hopes. On Friday, the country reported a record 32,695 local cases, as infections for a second straight day surpassed the previous peak recorded in April during Shanghai’s months-long lockdown.

Instead of relaxing controls, many local officials are reverting to the zero-tolerance playbook, attempting to stamp out infections as soon as they flare up.

Some of the cities that dropped mass testing requirements following the announcement are already tightening other Covid restrictions.

The northern city of Shijiazhuang was among the first to cancel mass testing. It also allowed students to return to schools after a long period of online classes. But as cases rose over the weekend, authorities reimposed a lockdown on Monday, telling residents to stay home.

On Tuesday, financial hub Shanghai banned anyone arriving in the city from entering venues including shopping malls, restaurants, supermarkets and gyms for five days. Authorities also shut down cultural and entertainment venues in half of the city.

In Guangzhou, officials this week extended the lockdown on Haizhu district – where the protest took place – for the fifth time, and locked down its most populous Baiyun district.

Zhengzhou, home to the Foxconn factory where workers clashed with police, imposed a five-day lockdown on its main urban districts.

In Beijing, streets in its largest district of Chaoyang are largely empty as authorities urged residents to stay home and ordered businesses to shut. Schools across several districts also moved to online classes this week.

Low vaccination rates among China’s elderly have led to fears that a loosening of restrictions could overwhelm the country’s health system. As of November 11, about two-thirds of people age 80 and older had received two doses, and only 40% had received a booster shot.

Yanzhong Huang, a senior fellow for global health at the Council on Foreign Relations, said the re-tightening of Covid controls reflected a typical public policy dilemma in China: “If you relax the policy, there will be chaos; but if you tighten up, it will be stifling.”

Huang said he does not expect any fundamental changes to the zero-Covid policy in the short term. “Because the local governments’ incentive structure has not been changed. They are still held accountable for the Covid situation in their jurisdiction,” he said.

For their part, Chinese officials have repeatedly denied that the 20 measures listed in the government guidelines were meant for a pivot to living with the virus.

The measures are about “optimizing” existing Covid prevention and control policy, Shen Hongbing, a disease control official, told a news conference last week. “They are not an easing (of control), let alone reopening or ‘lying flat’,” he said.

Back on the outskirts of Beijing, Zhou said while the zero-Covid policy “is beneficial to the majority,” its implementation at a local level had been too draconian.

“I don’t want things like this to happen again in China and anywhere in the world,” he said. “I lost my father. My son lost his beloved grandfather. I’m furious now.”