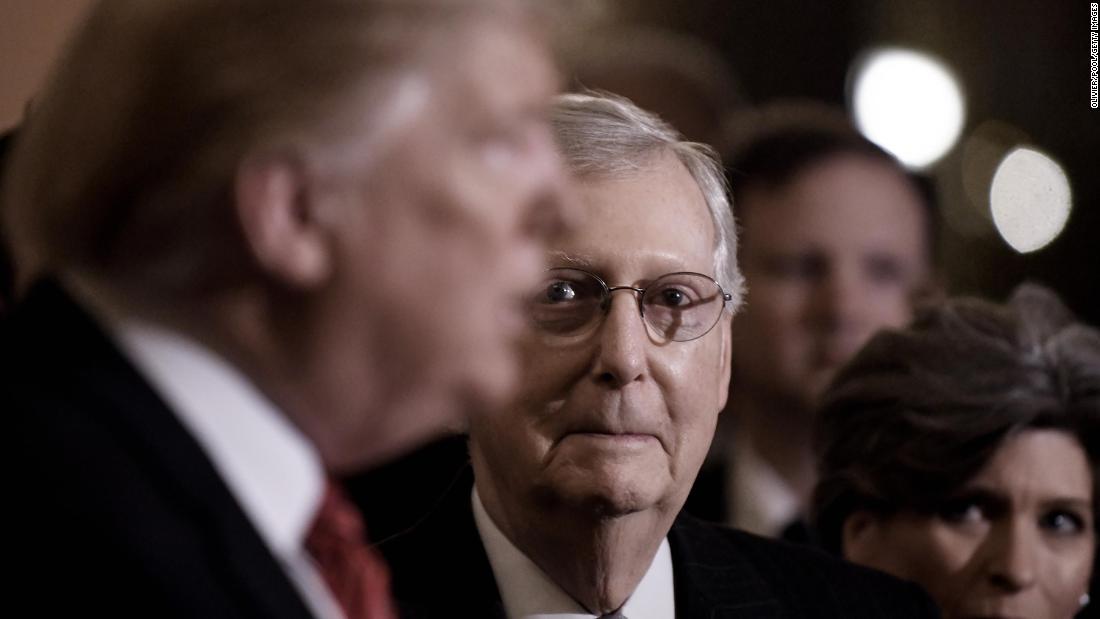 “Mitch McConnell has repeatedly bailed out Joe Biden, giving him gifts of Senate votes, which are the only things keeping the Biden administration on life support,” Tshibaka said about the Senate’s highest-ranking Republican, adding: “When I defeat [Alaska Republican Sen. Lisa] Murkowski and become Alaska’s next U.S. Senator, I will not support Mitch McConnell as leader. It’s time for new, America First leadership in the Senate.”
Which is, in and of itself, is not terribly surprising. After all, McConnell is supporting Murkowski in her reelection bid, which gives Tshibaka plenty of reason to position herself against the Senate Minority Leader.
What’s far more interesting is whether Tshibaka is — whether intentionally or not — starting a trend.
Remember that:
a) Former President Donald Trump has endorsed Tshibaka.
b) Trump has been hugely critical of McConnell for the way he has dealt with President Joe Biden and the Democratic majorities in the House and Senate. “He has all the cards to win, but not the ‘guts’ to play them,” Trump said of McConnell earlier this month. “Instead, he gives our Country away, just like he did with the two Senate seats in Georgia, and the Presidency itself. The Old Crow is a disaster!”
c) Trump has actively sought to recruit a senator to take on McConnell for the party’s top leadership job.

Combine those factors and you get at least the possibility that saying you won’t vote for McConnell as leader if you win is a must-do for Senate GOP candidates trying to win Trump’s endorsement.
Which is not an insignificant thing! Like, at all!
Why? Because, in several Senate races on the ballot in 2022, GOP candidates have made clear that they will do anything and everything to win Trump’s endorsement.
Missouri Rep. Billy Long, one of a number of Republicans running in the state’s open seat race, was blunt about Trump’s import.
“If he endorses in this race, I don’t care who he endorses. It’s over,” Long told Politico recently. “And that’s what I’m trying to impress upon him is that, you know, ‘you need to get involved in this race and put an end to it.'” (Long also pointed out that he was wearing a tie that Trump had signed, which, well, ok.)
The free-for-all for Trump’s nod is also playing out in Ohio, where each candidate is trying to out-Trump the others. As CNN’s Eva McKend put it recently: “Ohio’s crowded Republican Senate primary has become a battle over who most can align themselves with former President Donald Trump.”
Given the belief that Trump’s endorsement effectively seals the Republican nomination, why wouldn’t the former president seek to extract a promise just like the one Tshibaka made from these candidates?
Ditto other GOP candidates running in open seats like North Carolina (where Trump has endorsed Rep. Ted Budd) and Pennsylvania (where the former president has yet to back a candidate after his initial pick Sean Parnell suspended his campaign).
Trump has, so far, struck out in his attempts to turn McConnell’s GOP colleagues against him. But the 2022 Senate races provide a bumper crop of candidates who might be more than willing to throw McConnell overboard to curry favor with the former president.
And if that happens, McConnell’s time as the top GOP leader in the Senate could be in jeopardy.