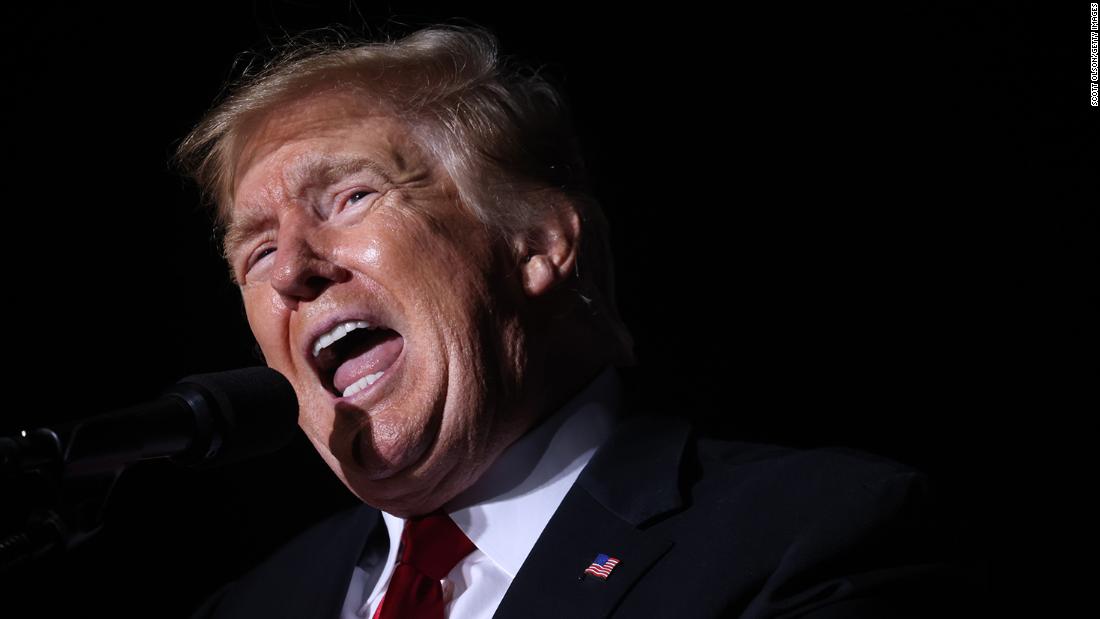 A version of this story appeared in CNN’s What Matters newsletter. To get it in your inbox, sign up for free here.
But their amnesia has grown along with their fealty to former President Donald Trump, and it is again thrusting the US form of democracy into peril.
The growing fear outside the committed base of the GOP is that the attempted coup of 2021 was not a one-off, but rather “a dress rehearsal for something that could be happening near term, in 2022, and 2024.”
Those are the words of Fiona Hill — the Brookings Institution senior fellow, former Russia expert on the National Security Council and witness at the first Trump impeachment hearing — who said on CBS News on Sunday that the US is in a dangerous place.
She said it’s absolutely appropriate to view the Capitol insurrection as a sort of pre-revolutionary act.
RELATED: US Capitol Police whistleblower alleges leadership failures on January 6
The coming question for all Americans is whether their government should be run by a president and a government selected by voters.
This past weekend provided multiple examples of how the GOP is moving to fully embrace Trump and his overtly antidemocratic views.

Steve Scalise, the second-ranking House Republican, was pushed repeatedly Sunday by Fox News’ Chris Wallace about whether the 2020 election was legitimate. He would not say “yes.”
“I’ve been very clear from the beginning,” Scalise said on “Fox News Sunday.” “If you look at a number of states, they didn’t follow their state-passed laws that govern the election for president. That is what the United States Constitution says. They don’t say the states determine what the rules are. They say the state legislatures determine the rules.”
This antiquated view of constitutional law is the bedrock of a growing view that, apparently, legislatures and not voters, should select presidents.
It’s a misreading of state laws and antidemocratic to the core. It’s becoming the main view of Trump-backing Republicans.

Liz Cheney gets further away from her party on elections

As Scalise moved toward the election doubter crowd, fellow Republican Rep. Liz Cheney of Wyoming tweeted in direct response to his comments that there should be room for truth in the GOP.
She said: “Millions of Americans have been sold a fraud that the election was stolen. Republicans have a duty to tell the American people that this is not true. Perpetuating the Big Lie is an attack on the core of our constitutional republic.”
What she said is correct. What makes it most notable is how lonely she sounds saying it.

Trump’s hold on the GOP is even more complete. Witness Chuck Grassley.

That Sen. Chuck Grassley feels the need to seek Trump’s approval is telling. Grassley is the longest-serving Republican in the Senate who has been in office for many decades. He appeared alongside Trump at a rally in his home state of Iowa over the weekend.
“I was born at night, but not last night. So if I didn’t accept the endorsement of a person who’s got 91% of the Republican voters in Iowa, I wouldn’t be too smart. I’m smart enough to accept that endorsement,” Grassley said.
It’s an odd turn for a lawmaker who spent decades building up a reputation as a strong-willed pragmatist and protector of whistleblowers.

Don’t expect Trump to join Senate Minority Leader Mitch McConnell on the campaign trail. McConnell may be the highest-ranking Republican in elected office, and he might have drastically softened his tone when addressing the insurrection, but he still provides an excellent target for Trump’s political attacks.
Last week, McConnell acquiesced to Democrats’ demands and offered a two-month reprieve in a standoff over the US debt ceiling that, if not raised, could send the US economy over a cliff.
Trump’s words for McConnell speak to the fact that he sees no problem with sabotaging the economy.
“And you know what it does? It gives the Democrats more time, two months, gives them more time to figure it out,” Trump said in Iowa. “They can now have two more months to figure it out how to screw us, OK.”
He’ll never forgive McConnell for not working to overturn the 2020 election.
RELATED: Trump tears into McConnell over debt ceiling deal with Democrats
“Mitch McConnell should have challenged that election, because even back then we had plenty of material to challenge that election. He should have challenged the election,” Trump said. “He’s only a leader because he raises a lot of money and he gives it to senators, that’s the only thing he’s got. That’s his only form of leadership.”

Trump will run again and will win the GOP primary. Then what?

Trump may also be seeking Grassley’s embrace. This has a normalizing effect on Trump and his efforts to overturn the election, perhaps, for those people who don’t follow politics every day and have been voting for Grassley their whole lives.
All signs point to Trump running again for president in 2024. He was in Iowa over the weekend. It’s usually the first state to make a choice in presidential primaries.
CNN’s Brian Stelter wrote about the online attention paid to an eight-minute monologue by the comedian Bill Maher, which tackled the danger of Trump’s “slow-moving coup” spread over several elections instead of ending in 2021.

Democrats will continue to raise the idea that Trump is leading the US in an antidemocratic direction.
During an appearance on ABC’s “The View,” former US Secretary of State and 2016 Democratic nominee Hillary Clinton said the United States is “in the midst of a concerted, well-funded effort to undermine American democracy.”
“I think we not only came close to a full constitutional crisis, I think we’re still in it,” Clinton said Monday. “That gives me absolutely no satisfaction in saying this, because I think we’re at a very dangerous, continuing high-level attack on the legitimacy of our government and the election of our president. And obviously, our former president is not only behind it, he incited it, he encouraged it and he continues to do so.”

Neither Christine Todd Whitman nor Miles Taylor are, or have been, close to the GOP’s base for some time. She’s the former New Jersey governor and Environmental Protection Agency administrator, and he is the former Trump-era Department of Homeland Security official who wrote under the pseudonym “Anonymous” about defying his former boss.
RELATED: GOP senators who voted to convict Trump say it’s too soon to worry that he could undermine 2024 election
But they’ve raised the alarm about their party’s direction and pledge in the New York Times Opinion section to support endangered moderate Democrats like Rep. Abigail Spanberger in Virginia and Sen. Mark Kelly in Arizona. They’re also interested in saving truth-telling Republicans like Cheney.
“It’s become obvious that political extremists maintain a viselike grip on the national G.O.P., the state parties and the process for fielding and championing House and Senate candidates in next year’s elections,” they wrote, adding that they and others have considered forming a party to appeal to disaffected Republicans.
“Rational Republicans are losing the G.O.P. civil war. And the only near-term way to battle pro-Trump extremists is for all of us to team up on key races and overarching political goals with our longtime political opponents: the Democratic Party,” they wrote.
All indications are the party is moving in the opposite direction and casting moderates aside even as it looks toward gains in 2022.

Republicans still have an advantage in 2022

Despite all of this, Republicans have the historical advantage and the momentum heading into the 2022 midterm election. As Trump consolidates his hold over the party, its expected success next year could create a feedback loop among Republicans to double down on their support for him.
RELATED: The 10 Senate seats most likely to flip in 2022

The vast majority of Americans have no interest in violent confrontation, so there was something jarring in the words of a supporter at Trump’s Iowa rally who said very seriously that “civil war is coming.” That kind of active mindset is exactly what was behind the insurrection. It’s clearly still around — and it was blooming at Trump’s rally.