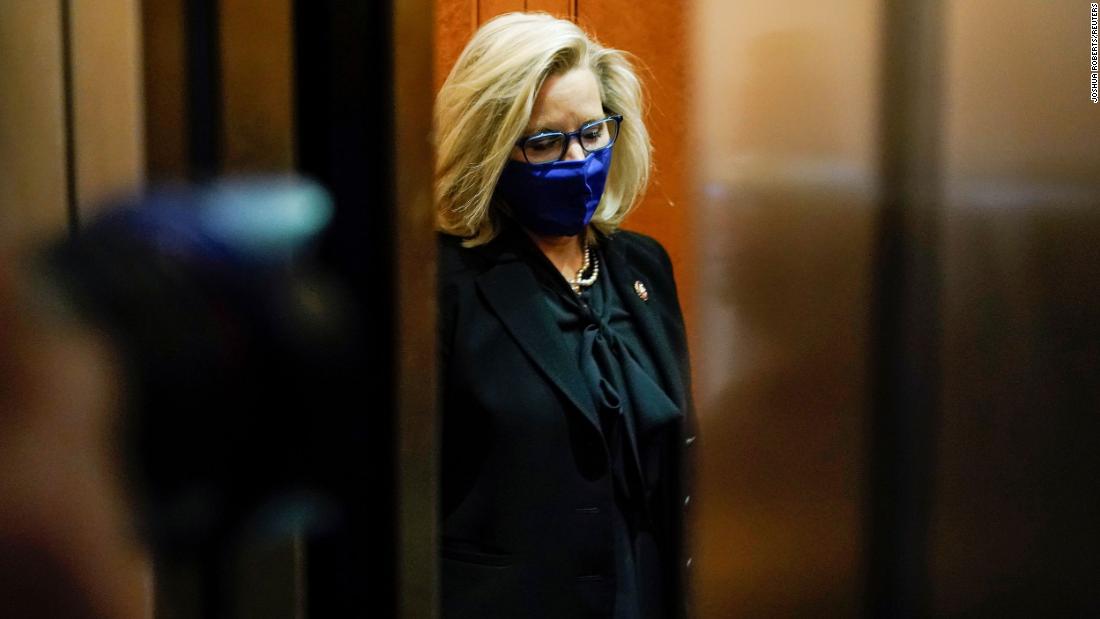 In a short, powerful speech late Tuesday, the lawmaker from Wyoming shamed colleagues who will vote on Wednesday to strip her of her No. 3 House GOP leadership post, showing the guts to speak truth to the ex-President’s malevolent power that most Republicans lack.
History is likely to remember her remarks far longer than the tortured explanations of Republican power brokers — like Minority Leader Kevin McCarthy of California — as to why she must be purged after pointing out Trump’s lies and dangerous authoritarianism.
Cheney spoke in a mostly empty House of Representatives on Tuesday night, after many of her fellow Republicans had spent the day saying it was time to move on from Trump’s insurrection and trashing of America’s tradition of peaceful transfers of power.
But Cheney made a blunt case that the party and the country cannot forget — not least because the peril from the seditious ex-President is still growing.
“Today we face a threat America has never seen before. A former President who provoked a violent attack on this Capitol, in an effort to steal the election, has resumed his aggressive effort to convince Americans that the election was stolen from him,” said Cheney, speaking slowly and in devastating clarity.
“He risks inciting further violence. Millions of Americans have been misled by the former President. They have heard only his words, not the truth.”

Heading for the wilderness

By getting her retaliation in first against her colleagues, Cheney showed that she — unlike all but a handful of other Washington Republicans — is willing to stand up to the ex-President’s bullying and debunk his delusional false reality.
She gave her speech at 8 p.m. ET, in time for prime-time news shows, but she was also speaking for posterity in spare but eloquent remarks that will embroider themselves in political lore, however Trump’s story eventually turns out.
Her willingness to take on Trump ensures Cheney is headed for a prolonged period in the political wilderness. As well as losing her leadership post, she is likely to face a primary challenge from a pro-Trump candidate if she runs for reelection. She will certainly be alienated from the bulk of Republican voters and media figures who remain in Trump’s thrall. She will have the company of a small group of GOPers who voted to impeach or convict Trump over the Capitol riot on January 6 and repudiated his attack on American democracy.
Cheney is being ousted despite the fact that she is one of the most conservative members of Congress and is far more authentic in that regard than Rep. Elise Stefanik of New York, who is her likely replacement. But Stefanik has the essential qualification in the party of Trump: complete loyalty to the former President and a willingness to amplify his lies about election fraud.
“I am a conservative Republican, and the most conservative of conservative principles is reverence for the rule of law,” Cheney said. “The election is over. That is the rule of law. That is our constitutional process. Those who refuse to accept the rulings of our courts are at war with the Constitution.”
In the short term at least, Cheney’s action is unlikely to do anything to drive Trumpism from a party it has consumed. McCarthy has wholeheartedly anchored the GOP’s hopes of winning the House back in midterm elections next year in Trump’s continued appeal. Millions of Republican voters, helped by round-the-clock lies from conservative media, buy Trump’s false narrative that the election was stolen from him with massive electoral fraud. There is very little sign — apart from a few honorable exceptions like Sen. Mitt Romney of Utah and Rep. Adam Kinzinger of Illinois — of any appetite in the party to change its delusional and anti-democratic course.
Cheney’s Republican colleagues say she must go because she won’t quit talking about the election. McCarthy said in a letter to members on Monday that it was time to stop “relitigating” 2020. Yet it is Trump, with his constant statements from his Mar-a-Lago resort, who will not put the election to rest.
A former President George W. Bush speechwriter, Michael Gerson, told CNN’s Anderson Cooper that Cheney’s speech was a recognition that the United States was at a “hinge point” that would decide on the future of the rule of law.
“This is a terrible danger. We have one party at the national level that is not committed to accepting the outcome of legitimate elections,” Gerson said.
“That’s not something that you can tolerate in the long run; that is a recipe for edging towards authoritarianism. So I think that it is a stark choice.”

‘It’s not about right or wrong’

Since returning to Washington this week, many of Cheney’s fellow Republicans portrayed her principled stand as an issue that interests the media but has no resonance outside Washington.
Given Trump’s grip on conservative activists and the polarization the ex-President sowed in the country to cover up his embarrassing election loss, that may well be true.
Others have argued that this is all a matter of politics and Cheney is distracting from an effort to check President Joe Biden’s sweeping liberal agenda. That may also be true — but it is undercut by the fact she has made one of the most coherent conservative critiques about the new administration.
“It’s not about right or wrong, it’s about the focus of our conference, and focusing on pushing back on the agenda that’s being pushed by the Biden administration,” the second-ranking Republican House leader, Rep. Steve Scalise of Louisiana, said on Tuesday.
A day after Sen. Joni Ernst of Iowa said Cheney seemed to be a victim of “cancel culture,” she walked back her comments somewhat, reflecting the view of many Republican office holders of the need to look forward.
“We should be focused on unity, coming together, and making sure that Republicans are securing seats in 2022,” Ernst said.
Senate Minority Whip John Thune, a South Dakota Republican who has stated publicly that Biden won an election that was not stolen, had a warning for his party on Tuesday, as Trump issued new and false claims about voter fraud.
“If we continue to rehash the 2020 election, we’re going to lose the 2022 election. If we’re talking about jobs and economy and national security and safe streets and strong borders and energy independence … we got a really good path to get the majorities back in ’22,” he said.
Cheney countered criticisms of her conduct by telling her colleagues they had a patriotic duty to speak up, not least because a new Cold War may be brewing, this time with China, and Trump’s malfeasance was playing into propaganda designed to show America as a failed nation.
“Remaining silent and ignoring the lie emboldens the liar,” Cheney said, in a passage that seemed especially directed at McCarthy.
“I will not participate in that. I will not sit back and watch in silence while others lead our party down a path that abandons the rule of law and joins the former President’s crusade to undermine our democracy.”