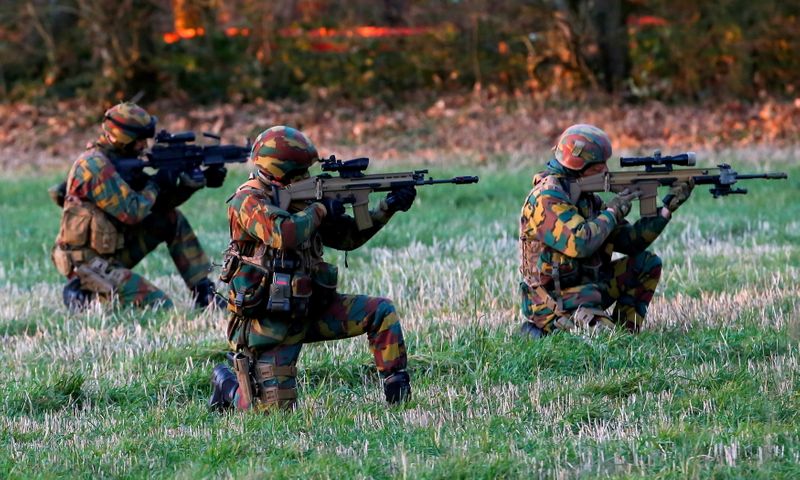 By Robin Emmott and John Chalmers

LJUBLJANA (Reuters) – The chaotic withdrawal of Western forces from Afghanistan has shown that the European Union needs to intervene militarily in a crisis without relying on U.S. troops, senior EU officials say.

Two decades after EU leaders first agreed to set up a 50,000-60,000-strong force but failed to make it operational, EU states are once again aiming to create a 5,000-strong “first entry force”. They want a deal on its design by March 2022.

But as EU defence ministers gather in the Slovenian capital on Wednesday, the political impetus felt in Brussels, Paris and Berlin will again evaporate unless the bloc can agree on quick decision-making mechanism to deploy troops.

Two senior officials, speaking on condition of anonymity, voiced frustration that the EU, an economic power, was not able to protect Kabul airport for another three days beyond the Aug. 31 U.S. withdrawal deadline to allow for more evacuations.

France, Germany and non-EU member Britain were among those wanting more time to complete evacuations of their citizens and Afghans during a huge airlift mounted by Western forces after the Taliban took control of the country on Aug. 15.

“We do not need another such geopolitical event to grasp that the EU must strive for greater decision-making autonomy and greater capacity for action in the world,” EU Council President Charles Michel, who chairs EU summits, said on Wednesday at the Bled Strategic Forum in Slovenia.

NATO supports such views and the United States has urged Europeans to invest in deployable troops, as long as European soldiers are not drawn from its operations around the world.

The sense of paralysis over Afghanistan in EU capitals was particularly strong because the 6,000-strong U.S. military force used to secure Kabul airport was roughly the same size as the EU battlegroups that the bloc has had since 2007 but not used.

It was also a case of deja-vu. In the 1990s, EU governments proved unable to act as a group in the Balkan wars and relied on U.S.-led NATO to stop the bloodshed on their doorstep.

“We must strengthen Europe so that we never have to leave it up to the Americans,” Armin Laschet, Germany’s conservative candidate to succeed Angela Merkel as chancellor, said during a debate for this month’s federal election.

The EU’s rotating battlegroups need the approval of all 27 EU states and generally require an authorising resolution from the United Nations Security Council. Previous efforts to deploy in Chad and Libya failed. Disputes over funding are an issue.

One solution could be to break up the battlegroups into smaller units to make them more flexible and more deployable, according to Niklas Novaky, an EU defence specialist at the Wilfred Martens Centre in Brussels.

“Otherwise it’s like playing roulette, because today you need a battlegroup led by an EU state that has a specific interest in the crisis of the day,” Novaky said.

A senior EU official declined to comment on the status of the battlegroups or who was the current lead country. No public information has been made available for several years.

The EU will present a draft proposal of a “first entry force” in November and wants a deal when France, the EU’s leading military power, takes over the six-month EU presidency from January.

In late 2017, EU governments launched a pact to fund, develop and deploy armed forces together, which one official said at the time was “bad news for our enemies”, even if joint military capabilities will take years to be ready.

NATO Secretary-General Jens Stoltenberg in May welcomed the inclusion of the United States into an EU-led project enabling troops to move more quickly across Europe in the event of a conflict with Russia.

But the focus on joint defence capability research has distracted attention away from immediate “crisis management”.

“The key problem is political will,” Carlo Masala, an international relations expert at the Bundeswehr university in Munich. “You can have 50,000 or 60,000 excellently-trained men and women for these kinds of operations. But if there is a lack of political will, it won’t work,” he said.