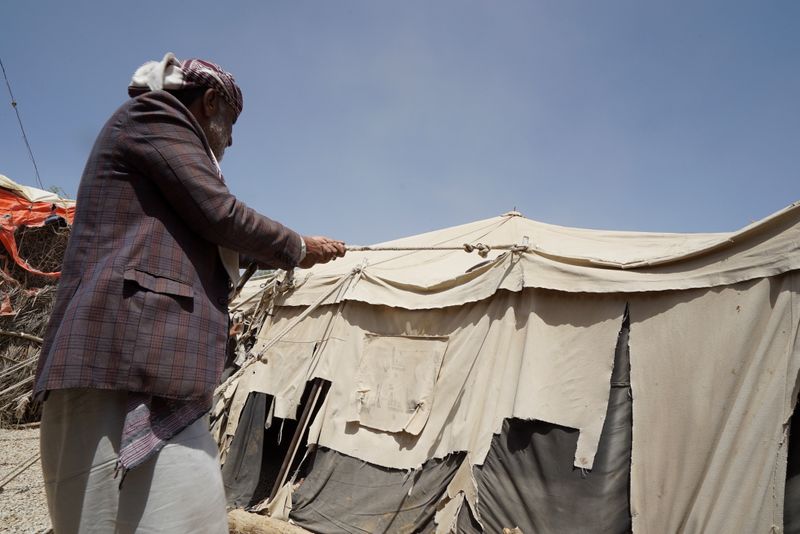 MARIB, Yemen (Reuters) – Iman Saleh Ali and her family left al-Jubah in the dead of night with only the clothes on their back to escape fighting between government forces and their Houthi foes, the second time they have been forced to do so in the battle for Yemen’s Marib.

With no means to afford accommodation, they now wait for assistance, huddled with 25 other families in a make-shift camp in Wadi Abida, east of Marib City, which is already home to hundreds of thousands of displaced Yemenis.

“We took nothing with us, not even a blanket. Just people escaping,” said the woman in her 50s. “We need beds, warm tents … until God answers our prayers and we can settle down.”

In the camp they have erected around the homes of relatives, young boys and girls help tighten the ropes of a tent as women collect twigs to cook meals. Children drink water from a shared metal bowl as flies swarm.

The United Nations says some 10,000 people were displaced last month alone by the fighting in Marib governorate, the internationally recognised government’s last northern stronghold. It is calling for a humanitarian corridor for aid.

Security has been heightened in Marib City, one of the governorate’s districts, with checkpoints and patrols, as the Houthis move to encircle it.

Last week they seized al-Abdiyah and Harib districts while fighting continues in al-Jubah and Jabal Murad, where Ali once lived but also had to leave two months ago due to battles.

“We had hoped to live in al-Jubah but the war followed us,” she said. “None of us work and we have no income to pay for rent, we have nothing.”

U.N. humanitarian coordinator in Yemen David Gressly told Reuters that access has been most restricted to al-Abdiyah which houses some 35,000 people, but that they have now been given authorisation though security concerns remain.

Luckily, he said, food was distributed in coordination with the World Food Programme just before the fighting, which is exacerbating a humanitarian crisis in Yemen that has left millions on the verge of famine and 20 million needing help.

“We believe now the situation is more quiet and we should see greater access in the days to come,” Greesly said, but nonetheless calling for the humanitarian corridor to be agreed by the warring sides.

“We are forward-deploying into the area a lot of supplies, food, medicine but also rapid response kits that provide basic necessities for those who are displaced.”

Tens of thousands of Yemenis have been killed since a coalition led by Saudi Arabia intervened against the Iran-aligned Houthis months after the group ousted the government from power in the capital, Sanaa, in late 2014.

Greesly, speaking in Sanaa, said that across Yemen this year between 200-250 civilians have been killed each month, including by landmines, active fighting, shelling and air strikes.

“To lose that many lives every month is unacceptable,” he said.