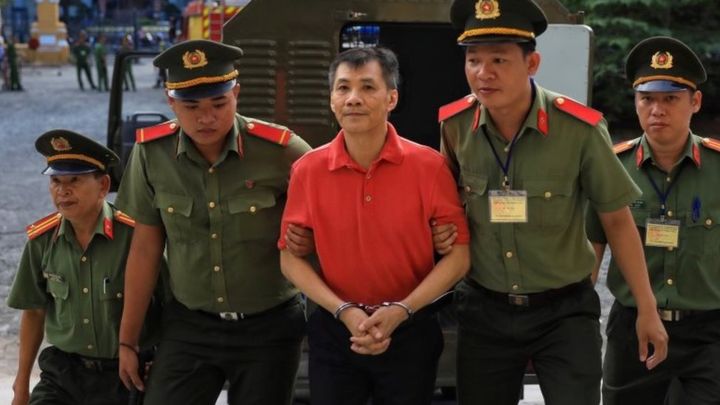 A court in Vietnam on Thursday jailed for eight years a man who formerly worked as a lawyer, on a charge of attempting to overthrow the state, just days after a U.S. citizen got 12 years on a similar charge.

At a one-day trial in Ho Chi Minh City, Tran Cong Khai, 56, was accused of joining, and then recruiting for, the U.S.-based Provisional Government of Vietnam, the Ministry of Public Security said on its news website.

In 2017, Khai and others planned to sabotage the Asia-Pacific Economic Cooperation (APEC) Summit in the central city of Danang, which was attended by U.S. President Donald Trump and other world leaders, it said in its statement.

“The organization (Provisional Government of Vietnam) incites some individuals to carry out activities aimed at sabotaging the state and causing political and social disorder in order to overthrow the people’s administration,” it added.

The group abused social media and the internet to distort the policies of the state, it said.

Khai, who practiced as a lawyer from 1989 to 2009, faces three further years of house arrest after completing his term, it said. It was not immediately clear why Khai stopped practising.

Reuters was unable to immediately identify and contact Khai’s lawyers to seek comment. The group did not immediately respond to a request from Reuters for comment.

In January, Vietnam said it had listed the group as a terrorist outfit because it set up units in the country to carry out acts of terrorism and sabotage, and assassinate officials.

The group is loyal to the now-defunct Republic of Vietnam, once backed by the United States and ruler of the southern half of the country until the Vietnam War ended in 1975.

The decision comes only days after the court jailed a U.S. citizen, Michael Phuong Minh Nguyen, for 12 years on charges of attempting to overthrow the state..