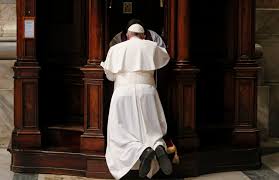 The Vatican on Monday strongly reaffirmed Catholic teaching that priests cannot reveal what they learn in confession, in an apparent response to moves in Australia and elsewhere to force them to do so in cases of sexual abuse.

A document from the Vatican’s Apostolic Penitentiary, which deals with issues of the sacrament of confession, said no government could force clergy to violate the seal.

“The inviolable secret of confession comes directly from divine revealed law and its roots are in the very nature of the sacrament, to the point that no exception can be admitted in any Church framework, let alone in a civil one,” said the document, which was approved by Pope Francis.

The document, which did not mention any countries or the sexual abuse crisis, complained of a “worrying negative prejudice against the Catholic Church”.

Most countries’ legal systems respect the religious right of a Catholic priest to not reveal what he has learned in confession, similar to attorney-client privilege.

But the sexual abuse crisis that has embroiled the Catholic Church around the world has seen this more frequently challenged.

In Australia, an inquiry into child abuse recommended that the country introduce a law forcing religions leaders to report child abuse, including priests told of it during confession.

So far, two of Australia’s eight states have introduced laws making it a crime for priests to withhold information about abuse heard in confession, while others are still considering their response.

In May, the California state senate passed a bill to require the seal of confession to be broken if a priests learns of or suspects sexual abuse while hearing the confession of a fellow priest.