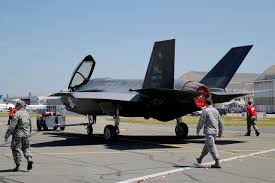 The U.S. will remove Turkey from the F-35 program unless Turkey changes course, reported Reuters.

“The decision to stop accepting more Turkish pilots for training in the United States, in one of the most concrete signs that the dispute between Washington and Ankara is reaching a breaking point”, according to the agency.

The U.S. Acting Secretary of Defense, Patrick Shanahan sent a letter to his Turkish counterpart, seen by Reuters on Friday, that “laid out the steps to remove Turkey from the program unless Turkey changes course.”

Ankara’s deal with Moscow risked undermining its ties to NATO, hurting the Turkish economy and creating over-dependence on Russia, Shanahan warned in his letter.

“You still have the option to change course on the S-400,” Shanahan wrote.

The Turkish Lira fell as much as 1.5 percent to 6.16 per dollar, adding to losses made last month when the rerun was announced by the nation’s electoral board. The currency has dropped 14 percent this year, adding to a decline of 28 percent in 2018.