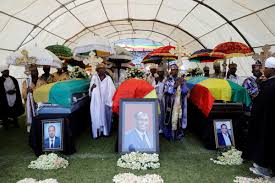 The Baklaba and Cake cafe was heaving with customers when truck-loads of heavily armed men in fatigues rolled up across the road outside the local government headquarters in Ethiopia’s Amhara region.

Within moments, the assailants had shot dead Amhara’s president, an aide and fatally wounded the state’s attorney general.

Hours later, 325 km (200 miles) to the south in Ethiopia’s capital Addis Ababa, gunshots rang out behind the high gray walls of a red-roofed villa as the military’s chief of staff and a retired general were slain by a bodyguard.

The attacks, described by the government as part of a coup attempt in Amhara, highlight the dangers Prime Minister Abiy Ahmed faces as he rolls out ambitious reforms in Africa’s second most populous nation – a regional powerhouse whose economic boom is now threatened by deepening ethnic and regional fissures.

Since Abiy came to power in April 2018, attention abroad has focused on the rapid political, economic and diplomatic changes he has been introducing in one of the continent’s most closed and repressive countries.

“The world out there wanted to believe the fairy tale. They became obsessed with their own narrative,” said Tamrat Giorgis, the managing editor of the Addis Fortune, a privately-owned English-language newspaper. “But that doesn’t chime with what is happening on the ground. It is much more complex and scary.”