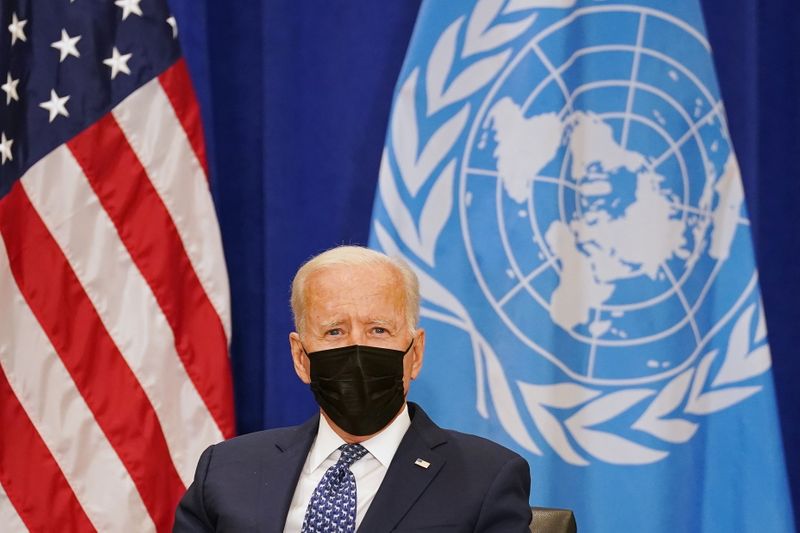 By Trevor Hunnicutt and Steve Holland

NEW YORK (Reuters) – President Joe Biden plans to defend his hasty troop withdrawal from Afghanistan on Tuesday in a speech to the United Nations, arguing it was needed to pivot U.S. policy to focus on a global challenge from China and climate change.

Biden will make his first appearance at the United Nations since taking office as president in January. He faces criticism of the Afghan pullout and his handling of an Australia submarine deal that angered France https://www.reuters.com/world/french-break-up-blow-bidens-china-focused-alliance-rebuilding-2021-09-18, a key ally in countering China.

Biden hopes to present a compelling case that the United States remains a reliable ally to its partners around the world after years of “America First” policies pursued by his Republican predecessor, Donald Trump.

“America is back. We believe in the United Nations and its value,” he said Monday evening before a meeting with U.N. Secretary-General Antonio Guterres.

In his speech to the U.N. General Assembly, Biden will “lay out the case for why the next decade will determine our future, not just for the United States but for the global community, and he will talk…about the importance of re-establishing our alliances after the last several years,” White House spokeswoman Jen Psaki told reporters.

Last week France recalled its ambassador to the United States over the submarine deal that undermined a French plan to supply Australia with a dozen diesel-powered submarines.

Biden is to meet Morrison in New York after his speech and sit down with Johnson at the White House after he returns to Washington on Tuesday afternoon.

He is seeking to talk to French President Emmanuel Macron in coming days to try to ease his concerns, but the White House said Biden has no plans to abandon the agreement with Australia.

A central focus of the Biden presidency has been countering a rising China. Biden’s meetings and remarks this week will be aimed at sending the message that this is an era of “vigorous competition with great powers, but not a new Cold War,” the official told reporters on Monday.

Biden will also up the U.S. commitments on climate change and COVID-19 vaccine donations, the official said, without providing specifics. Biden is to convene a virtual COVID-19 summit from the White House on Wednesday on the margins of the United Nations meeting.

Biden will preside over a White House meeting on Friday of leaders of the four “Quad” nations — Australia, India, Japan and the United States — an alliance seen in part as pushing back against China’s growing assertiveness.